We were woken by the announcement that the ferry was arriving at Dieppe which gave us enough time to grab a cup of coffee and Pete managed to squeeze in not only a blueberry muffin but also a sultana pastry after our massive meal last night.  I was still full. 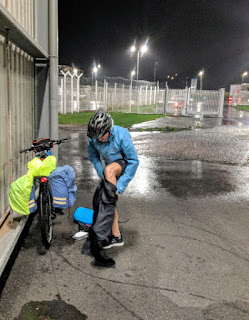 We noticed that not only was it still dark outside, but it was absolutely hosing down.  So we went down to the car deck and began dressing ourselves and our bikes in our wet weather gear in preparation for the disembarkation process.  We were the last off but our delay hadn’t seen any change in the weather, so we pulled over in a truck shelter and made some adjustments to our gear and checked where the railway station was, as we figured that would be open and we’d be able to take the bikes inside.  It was about a ten minute cycle away and when we got there we investigated the price of a train fare to Rouen in case it didn’t stop raining.  It’s only 24 euro so that’s always an option if the rain doesn’t stop.  Pretty disappointed in the Dieppe railway station though – no wifi and no toilets!!
The rain had eased off, so I persuaded Julia to forego the twelve euro spend each, for a lovely ride along French country lanes. Of course we had the obligatory climb out of a town, doesn’t matter what country, it’s always the same. 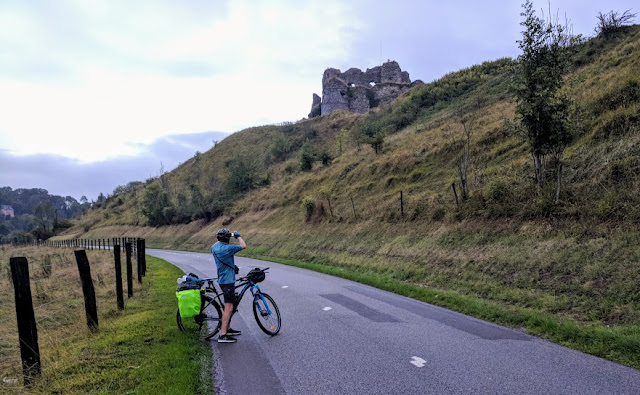 This time we took a gradual climb, passing an old ruined castle on the way, so photos were in order. The riding was nice, although undulating, when….it started to drizzle. To be fair the sky had looked iffy since our arrival on French soil. Now, it started in earnest. It was if the French were saying { in an outrageous French Monty Python accent }
“We spit on you Inngglliisshh Pig Dogs. You will nah taste the might of zee French wezzer. May your Knickers get very wet and zen ve vill laugh at you…..ha ha ha ….as zee waateerr trickes down your bum crack”
And trickle down our bum cracks it did…. For the rest of the day. In fact, those leetle froggies, saw it running down our bum cracks, it was that intense. We would cycle 10km’s then grab a breather under whatever shelter there was available and sometimes there was nothing, so we would plough on a bit further. It’s been a long time since we’ve cycled in that kind of downpour.
On the country lanes we had no worries with any traffic, but even in such appalling conditions, on the main roads, certain motorists go too fast, cut in too quickly or are generally just too edgy. With 30km’s to go, we were counting down and still it poured. After buying something to munch on at a local Lidl supermarket, the first shop of its kind anywhere along the route, we started entering the outskirts of Rouen. Not that we could see anything of the city as it was chucking it down, so this supposedly beautiful place was still a mystery.
Through the busy streets, stopping every now and then to get our bearings, until we reached our destination. Hotel Bonaparte is central to the city, just a short walk from the hub. We looked like drowned rats and our check in time wasn’t until 3pm, it was now only 1.30pm, but the nice man on reception told us to unload the bikes and then whip them down to their underground parking area, which we promptly did. With water dripping from us he gave us the room number and we piled the sopping luggage into the elevator. We were supposed to be staying in a campground tonight, but we had specifically wanted to see the light show at the Cathedral at 10pm and there wasn’t a local camping place. We were relieved just to have an indoor stay as everything was soaked. Whilst Julia dived into the shower, I started getting all our gear out, hanging things up from everything, including lights, pictures, door handles, everywhere, just to get them dry. Took coat hangers and opened the window, overlooking the street, to get some undercover airflow to dripping wet clothes. I hadn’t slept on the ferry crossing, so I was shattered. Once everything was taken care of I told Julia I needed a sleep and we both dozed off for an hour.

Upon waking, the room looked like a Chinese laundry, but it was doing the trick. We only have until tomorrow to dry them this way and we weren’t going to spend time looking for a laundry in town. Decided to go exploring as the sun had popped its head out when we woke, so Rouen was there to see. This city is very old with buildings dating back to 1066 [battle of Hastings…only thing I remember from school } and what a fantastic place to visit. History is all around you. Every street, nook and cranny is a photo opportunity and we were in our element. 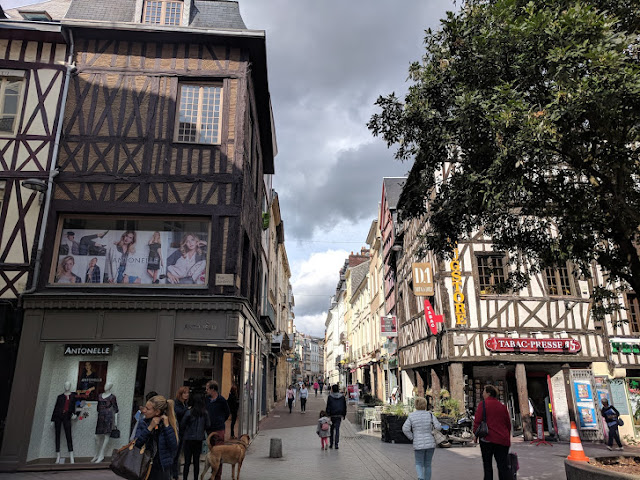 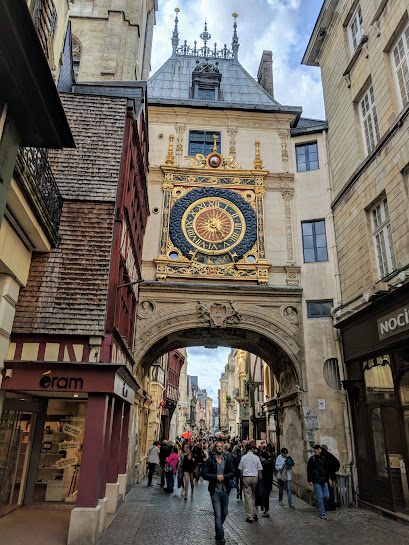 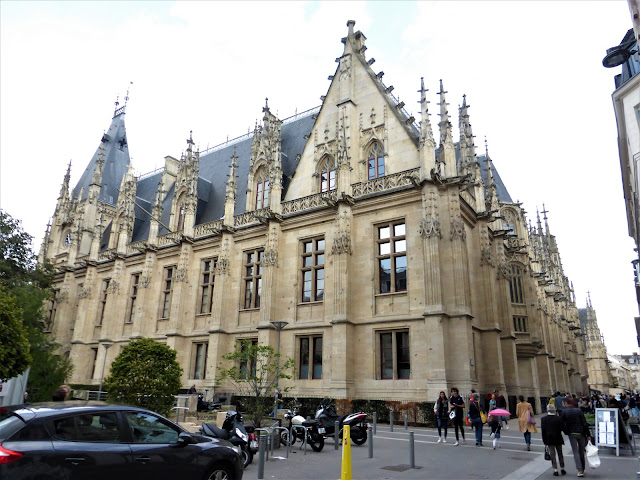 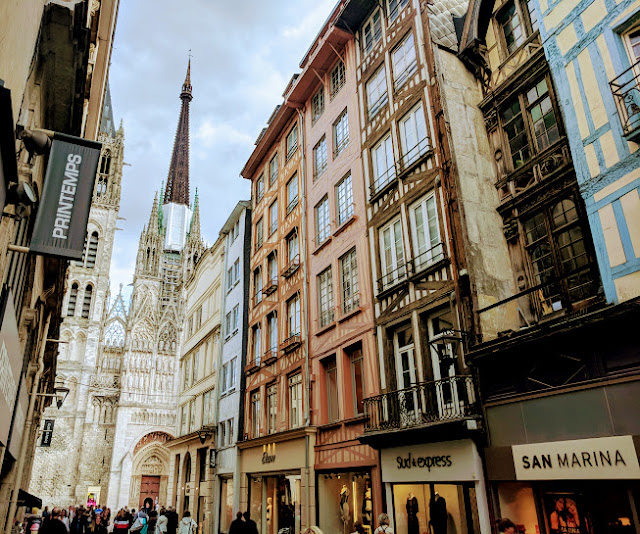 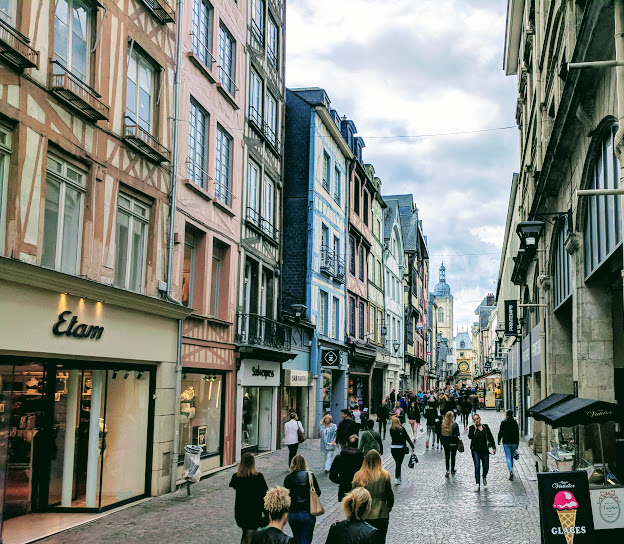 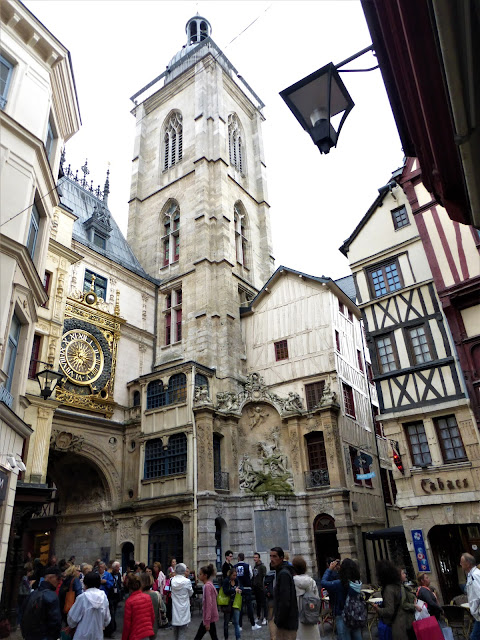 Did that for a couple of hours and the proximity to the hotel, made it easy. Back at our room, we uploaded photos, wrote the blog, ate a pastry and had a coffee, before venturing out at 8.30pm to a Lebanese restaurant Julia had read about, to sample their food. We were both delighted with the place, from the service, the ambience and the food was fantastic.
To end the evening we took a romantic (yes …romantic stroll….there’s life in the old dog yet…aaah ooooh) through the streets, which were now less crowded, except for the bars and clubs, along to the Cathedral, which we had seen earlier on.  It looked beautiful in the daylight, but lit up was even more spectacular. 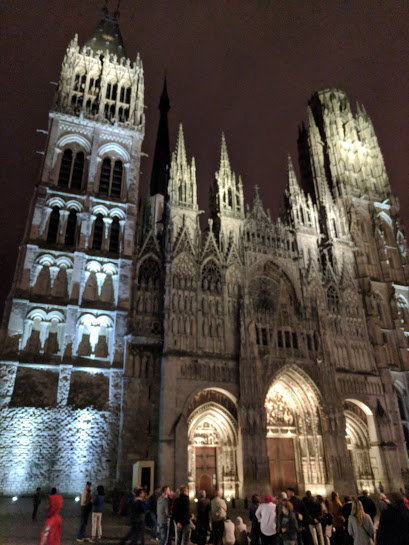 But then we were horrified to see a bloody great snake writhe it's way out of one of the bell towers!
I kid you not, and we've got the photo to prove it! 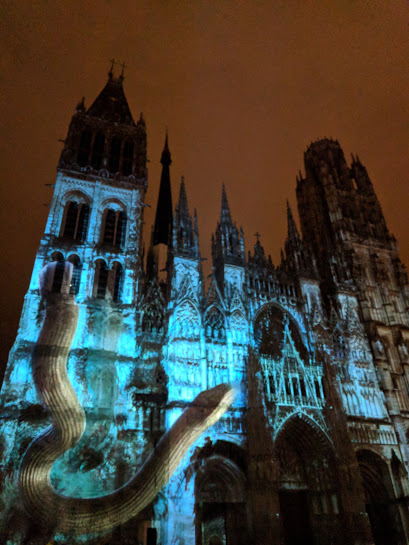 Then the snake turned into twisted tree roots, both beautiful and freaky and we began to wonder what the hell was in that delicious Lebanese food. 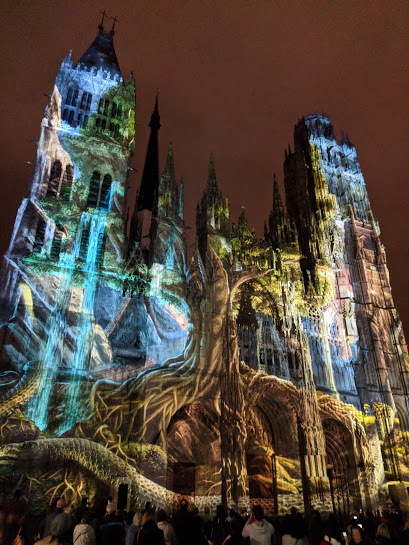 Next thing you know the whole thing has erupted into flames and there's a giant viking coming for us!  This was some trip! 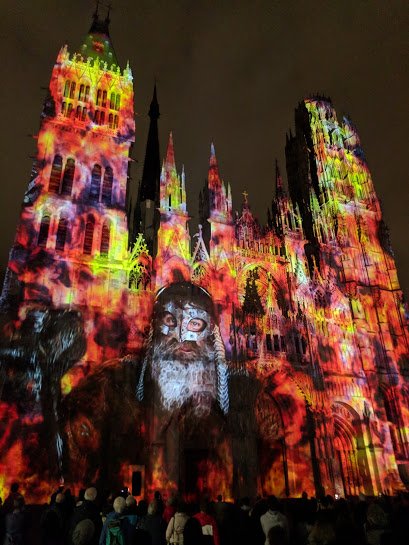 If anyone is ever intending coming to Rouen, you must, absolutely, see this show. Lasting 30 minutes, trying to describe it would not do it justice. Take our word, it’s amazing. 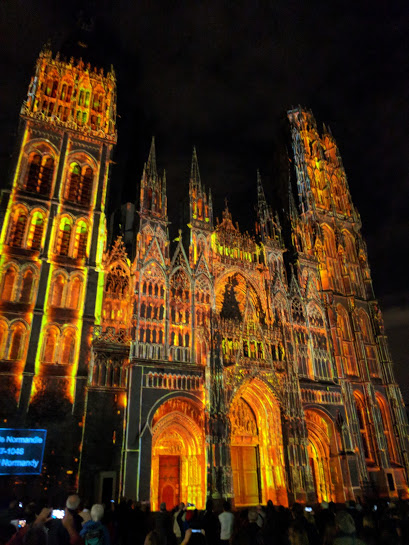 Back at the hotel, with a change around for bits of gear that required adjusting, we packed and sorted for tomorrow, hoping that it will be better weather to take us closer to Paris, where we meet dad on Friday. Then it was lights out on a day of two halves. 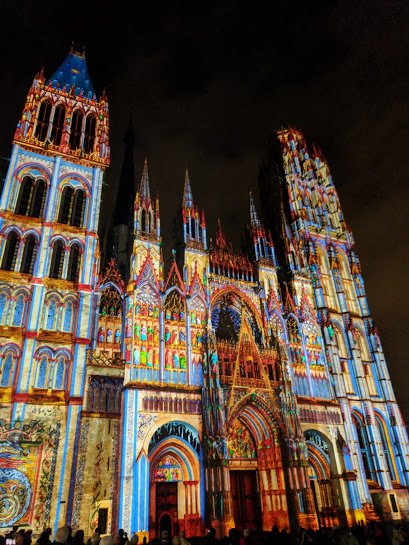 Posted by Pete and Julia Dolan at 7:53 AM