Woke at 6am this morning and straight into writing up the blog and answering any messages that needed doing. Having stayed an extra night at Tahlia and Duncan’s, we wanted to get on the road reasonably early.  The pair of them had been such incredibly welcoming hosts to us two oldies and we really enjoyed our time with them.  We were looking at trying to rattle off 70kms today, our first stop being Ludlow, for a look around and have a glance at the castle. 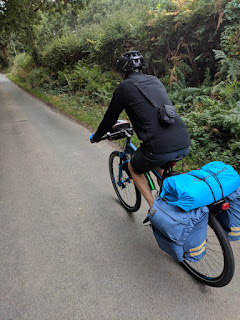 Said goodbye to Tahlia and Duncan and within two minutes we were once again on a deserted country lane – the only down side being there was no down…..only up, up and up some more as the road wound it’s way round the famous hill in these parts called the Wrekin.  For about 10km we slogged up hill and occasionally down dale but we only saw one car the entire time.  So to us, it was totally worth the effort.
It started to drizzle ever so lightly but not enough for rainjackets.
As we flew down the hill and crossed the bridge into the village of Cressage, it stopped raining.  On an A road for all of thirty seconds and then turned off into a quiet torture – clusters of flies that just wouldn’t leave us alone.  When we were going downhill, we lost them, but unfortunately there seemed to be far more uphill than down, and just to add to the torture of sweating uphill, we had these persistent flies in our faces.  And anyone who’s thinking that flies only hover around cows backsides, take the comparison right out of your head!  Pete was not a happy camper and the fact that his bike had developed a squeak didn’t help things. 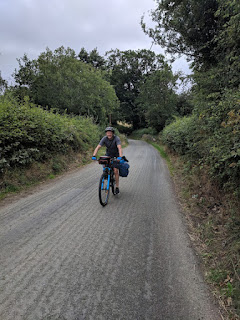 Decided we needed a blackberry break and as we were indulging, a sole cyclist stopped and introduced himself.  His name was Olly and he was cycling from Land’s End to John O’Groats in ten days – 160km per day.  Mind you he was on a racing bike and only carrying 4kgs of gear as he was eating at cafes and staying at bed and breakfasts.
As delightful as the country lanes were, we chose to take a moderately busy B road for awhile because we needed some food and we weren’t going through any villages up in the hills of Shropshire.  It wasn’t long before we came upon a garage and bought some soft buns, ham and an almond cake to share.  There was a table and chairs set up outside so we brewed up a coffee and tucked into lunch.  It started to drizzle again as we left and we departed the B road for lanes again and it was lovely. 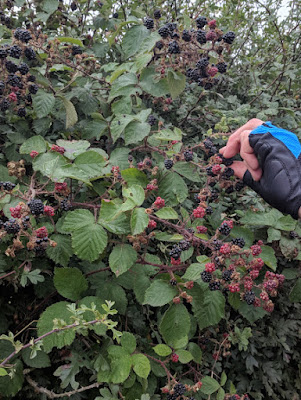 As we cycled down our chosen road, a sign said “Road Closed” but we kept going, hoping our bikes would be able to get through.  We had 10km to go along this road until we reached Ludlow.  After 5km, no sign of anything to cause the road to be closed and we’re thinking the farmers have erected the sign to keep through traffic off their lane.  Then there’s another sign and a km later, another one.  We’re beginning to worry a bridge might be out and we’ll have to retrace our steps, but eventually we come upon some road works (think they may have been installing fibre), and manage to sneak our way past – phew!
The squeak on my front wheel seemed a little better and we flew down one final hill into Ludlow. This is a beautiful old town. The last time we were here, we ate the most delicious fish and chips. Cycled to take some shots of the castle from various vantage points and then made our way up one of the paths surrounding the castle walls. At this point my squeak was working overtime. 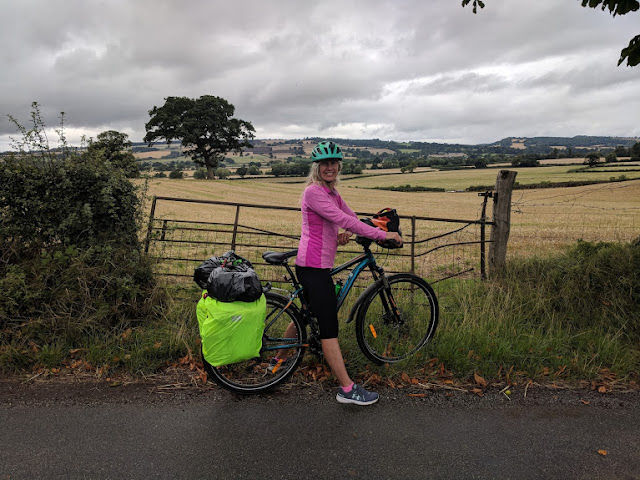 After a few more shots, we found a seat outside the walls. Julia went and picked up a couple of ice creams, whilst I unloaded my bike and tampered with the front wheel axle and the brakes. Still nothing, so I suggested to Ju that it needed to be looked at. Wandered through town  taking even more shots and found a café, where we enjoyed a nice cup of coffee and Julia spoke to a guy on the phone about looking at my bike.
After finishing our drinks, we cycled to the other end of town and found Epic cycles. A guy called Tom very kindly took some time (nice, considering they are booked up until the end of September) and began checking out the problem. He is a cyclist and told us that some of the hills we’d cycled today, were used in the British Hill Climb, so we did pretty well and enjoyed our riding today, albeit hard at times. He wasn’t familiar with the front axle set up I’ve got, but had a go at repairing it. He thought he needed a very small pin head screwdriver, smaller than he’s got, so checked the bearings, which were all good. He then applied some oil to a particular part, which is hidden when the wheel is on and put it back together again. As we sit in our camp, 7 kms out of Ludlow, it’s now 7.30pm and the ride out was okay….so here’s hoping, otherwise I’ve got a long way to go on a squeaky bike.

Pulled into a caravan park Westbrook Park at 5pm, hoping that they took tents, which they did and found a lovely site surrounded by hedges, with fantastic facilities, for a good price. Perfect. Tent up in no time and although it looked as though it may rain, as of yet it hasn’t.  Showered, ate, blogged, chatted to some fellow campers, had a cup of tea and hit the hay.