Good Morning Everyone….Yes it’s 5.30am on Farming Radio. And how is the farming community this wet and windy morning? Well …we’ve got the good people over at Farmcombe wide awake now. Yes that’s right…we’ve been driving our jolly little tractors backwards and forwards over a fifteen foot distance with the scoop on the front, picking up dirt and cow muck. And the best part is, everytime we move backwards, the beeping sound, made for stupid people, who can’t see a twenty foot high machine reversing over them, gives off a high pitched constant beep.
That’s great news… we’ve heard that you woke those two lycra clad touring cyclists up real early this morning by driving your utes up and down the driveway.
Too right….we don’t want those townies riding through these parts thinking it’s one big holiday around here, with horses and cows quietly grazing, and the wheat gently blowing in the breeze, giving off a whiff of silage every once in a while. Great…..well we hope they’re up and riding in this wind and rain you’ve laid on, cause it ain’t no holiday round these parts..
It was 5.55am when I turned on the phone after being rudely awoken by these hardworking farmers.  As we were deciding whether to break camp early, it started to rain so we decided to stay put and have a cup of tea and some muesli and banana in the sanctuary of our little tent – which so far has been a lovely little refuge but hasn’t really been tested yet.
At 9.20am we broke camp hoping for an easier day than the last couple. Out of the gate heading for Lambourn, which started us wondering about what was to come, as there was a small hill into the village. However that was pretty much it for the hills as we now followed the river Lambourn into the affluent town of Newbury.  This ride was thoroughly idyllic, winding its way through one quaint village after another with barely any traffic and hardly a hill the entire way into Newbury.
Needing to upload the blog for our enthralled public, (a retired butcher from Clapham), we visited Starbucks, who incidentally, serve a pretty good cup of coffee as well, so we indulged, in both coffees and a muffin. We had managed to park the bikes right outside the window where we were sitting, to keep an eye, but this pleasant town didn’t require monitoring.
Loaded up with food from the local supermarket, we rolled out of town, for our first canal journey of the tour and what a days riding we had. Not only had the wet weather cleared, but the Kennet-Avon towpath for ninety five percent of the ride, between Newbury and Reading, was magnificent.  It was hard packed gravel but our 29 inch wheels seemed to soak up a lot of the vibration.  There was a small distance of path covered in pine needles at one stage and they really soaked up the bumps – felt like you were riding on a cloud.

Not too far into this beautiful towpath, we came across another bikepacker and pulled up to have a chat.  His name was Chris and not too far behind him was his partner Lorraine.  They had just cycled all the canal paths from Bristol to Birmingham, down the Grand Union to London (sounds like that one hasn’t been improved at all since we cycled it two years ago) and now were heading back to Bristol. Always nice to meet other bikepackers and chat about the common trials we all have on the road. 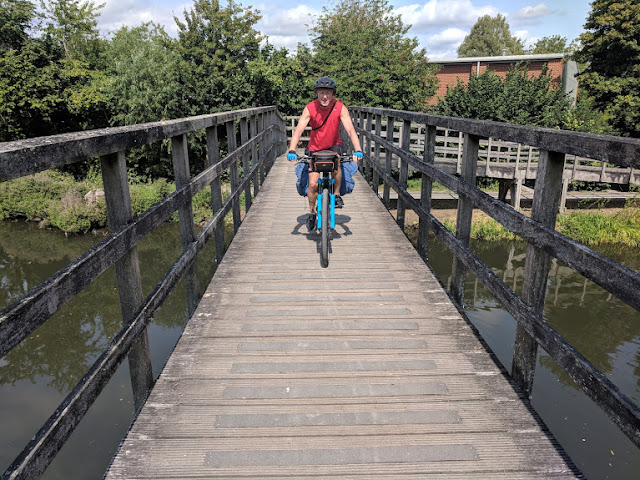 We rolled along at a steady pace and around 3pm we pulled up next to a lock and unpacked our soaked fly and groundsheet, draping the latter over the lock gates, as there were no boats in sight. Enjoyed a delicious and filling meal and were just getting ready to pack up, when two canal boats chugged into the lock.

As we watched them go through the routine, we discovered that the woman driving the first was from Liverpool and her name was Mary. She was lovely and invited me on board (while Ju was packing up lunch and keeping an eye on the bikes) for a look over the home that she has been living in for eleven years now. It was brilliant and had all the mod cons, including an en-suite. Enjoyed meeting her, her partner Trevor and their pal Paul, whose boat was newer than Mary’s and more open plan. Very nice people. If you’re reading this Mary, it was a pleasure to meet you and good luck on your travels.

The next 10 kms passed swiftly and soon we were leaving the towpath into the heart of Reading.  Just before we got into the city however, we had a couple of annoying barriers to get round which we managed with a bit of Kiwi ingenuity.  Two older walkers, very laden down with backpacks, admired our skills.  Got chatting and they were also Kiwis and had walked 32km so far that day…..and you think we’re mad!!!
Reading seemed a very vibrant city, with lots going on, especially for a Thursday arvo, however the Reading Rock Festival starts tomorrow, which accounted for the throngs of people.  Stopped at Sainsbury’s to grab something for dinner and as we were loading our purchases into the panniers, we were approached by a woman who looked to be somewhere in her 40’s with rotting teeth – which we instantly recognised as a P addict probably actually only in her late 20’s. No surprises to us she starts a sob story which we knew was just the pre-cursor to asking us for money.  Stopped her mid-flow and told her we’d just spent our last three quid and held up our cans of green beans and beef curry as evidence.  She realised she wasn’t getting anything from us and wandered off while we mounted up and headed east along the canal again for a short distance on our way to Sandford’s Camping. Took the roads again which were all suburban and found that there was in fact no camping ground to be had. The address was a family home…go figure? Whist trying to work out why anyone would post that online, we asked a family standing outside their house, just down the road, if they knew? News to them, but the family were all Liverpool supporters and we discussed the game on Monday, which the “Reds” had won 2-0.

By now, time was pushing on and our only other option was a camp with no shower and the equivalent of an adult potty for the toilet and not much else. It was about 10kms away and still we had beautiful riding conditions.  Flat, unpopulated roads with the neighbouring houses becoming more and more grand as we closed in on Windsor.  A lot of them had very enticing lawn areas where we could easily pitch a tent, but we managed to resist the urge, and finished the day with a hill up to the Scotlands Campsite. Thoroughly enjoyable riding today and after setting up and eating we talked about going to Windsor Castle tomorrow morning, (seeing as we’d progressed far further along than we had wanted today due to no convenient campsites), prior to going to see Chris Laiolo, who I haven’t seen for thirty seven years.