14th Aug
Up at 5.30am this morning and crept downstairs for a cup of tea and piece of toast, followed quickly by Pete and Jimmy.  Then we all went for another early morning bike/blackberry gathering mission, taking our time cycling about 20km again and back to Peg’s about 9am.  I let Jimmy ride my bike again and look forward to getting back on it myself tomorrow.  Pete offered his bike to both me and Jimmy but with his seat like concrete, both of us refused his kind offer. 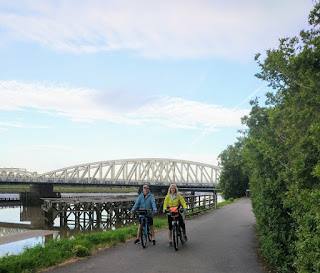 During the wee hours of the morning, Pete’s cousin Elizabeth had arrived home from France with her partner Phil.  They emerged about 10am and having done some cycle touring themselves were keen to compare notes on gear and bikes.  We put our tent up again in the midday sunshine and just as we were dismantling it, Debbie, Mavis and Terry arrived.  Spent a couple of hours or so socialising with them before Vicky and her partner Graham picked us up and took us back to their new home for a coffee.  They have bought a lovely old barn conversion house which they have made into a beautiful and comfortable home.

They dropped us back to Peggy’s about 5.30pm and an hour later Andy Francis called in.  He, Pete and Jimmy went for a walk and when they got back we all sat outside having a cup of tea as the sun set.  He left about 8pm and we went inside for dinner, cooked by Phillip and Elizabeth (aka their majesties). By now, time was moving on and after chatting to Elizabeth about “tics” and what to look for we finally surrendered to sleep. Final night at Peg and Andy’s this time around and the last time that we’ll ever stay at this house again, as they have sold it and are moving up the road to a bungalow. They’ve been here 42 years and it will be a sad day when they move the last item into the van. Julia and I have enjoyed some great times here and Peg and Andy have always treated us as their own. The last few days spending time with all the family, except Eileen and Stewart, who live in Melbourne has been great and conversation has been easy, with some good laughs. Looking forward to the next time we are all together.

Posted by Pete and Julia Dolan at 2:35 AM