Ju was awake at 5.45am this morning and began with the wages and bank payments and photo editing. An hour later I finally climbed out of bed and began to get my gear sorted, ready for the off. Downstairs I went outside and hung up the sleeping bags on the line to air out. There was a nice breeze blowing. I then pumped up our tyres and lubed both bikes.
Inside Chris had risen and was talking to Julia in the kitchen. He got stuck into making us bacon, eggs, tomatoes and toast.  It’s been a great stopover – both fully recharged after lots of excellent food and nice to sleep in a bed again. Bikes all loaded, we were ready for our ride into London town, along the Thames cycle path. On certain sections of this ride, the surface is okay. Some is concrete, some grass or dirt and some cinder. Whatever the surface, treeroots growing underneath can cause serious bumping and jolting, not ideal when carrying weight.

We had estimated that the ride would take us about an hour and a half….but we had estimated wrong…! After we had been riding for some time, my bike started to get a wobbly feeling at the back. Oh dear, puncture time. Tried pumping it up, in case it was a slow leak and I could at least make it to Richmond, where we had arranged to meet Steve (for those that aren’t familiar, Steve is a good mate from Middlesborough, who once lived in NZ).
When it slowly started going down again, we had no option but to pull over and repair. Had the back wheel off (had to be the back wheel with the added complication of the chain and derailleur) and was just about to put a new tube in, when a guy called Jason, who was walking past with his dog, stopped and offered assistance. Fortunately for us, he was a racing cyclist and showed us a couple of techniques to make life easier. Tyre on and off to White Cross, a pub in Richmond.

By now, Steve had been waiting for ages and my mood was pretty sour. It turned almost immediately when we caught up. It was great to see him again and he looks well. It was on our last trip two years ago that we spent a couple of days with him here and normal life for him, has mirrored ours, not much has changed in everyday activity. Enjoyed some drinks and a meal at the pub, which was very expensive, for what it was….but….this is Richmond, London, and the whole experience was very nice, so you can’t put a price on that, well you can actually…but I won’t say.
Steve had arranged our stay at the Premier Inn in Ealing, about 6kms away. Once again, crap cycle paths took us around Kew Gardens before very busy roads led us to our very nice accommodation. The reception staff put our bikes in their lock up for safe keeping and we dropped the rest of our stuff in the room, before heading to another pub, The New Inn, to watch Liverpool beat Brighton1-0. After the game, walked to yet another watering hole called The Red Lion, for more drinks and a delicious meal.

We were both starting to flag by this time, but upon leaving Steve, we watched Sarah Milliken, the comedienne, followed by a bit of Ricky Gervais on TV, very funny.
Then it was lights out to the thought of repairing my inner tube tomorrow and buying another new tube, so that we have a spare ready and don’t have to wait around for glue to set – because as our new mate Jason reminded us today, punctures like to come in threes…….. 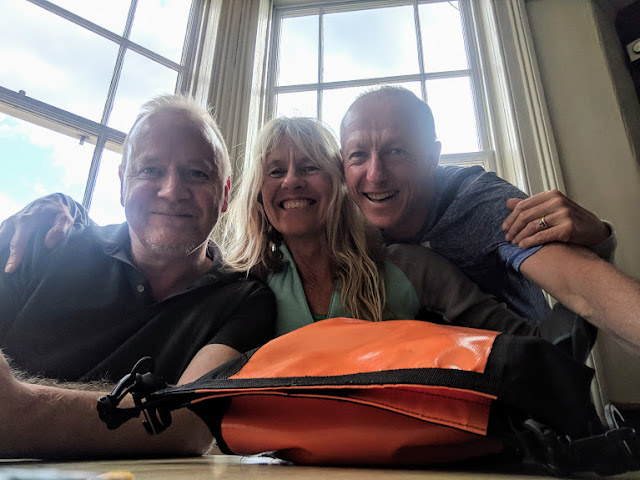 Posted by Pete and Julia Dolan at 4:42 AM