Today marks our final day in England. What have we seen so far?
The summer which was a cracker in these parts, failed to show itself to us and we have had grey, overcast skies for our entire stay, with the cloud clearing somewhat in the afternoons. For us, that has been ideal and other than the pouring rain on Sunday, we have only had a few drops. It has been mild to warm most days and Julia has been hot most nights, but I’ve been telling her that forever. All in all, great cycling weather.
The A AND B roads are extremely busy in general and although we have found the odd one that has been quieter, we stay off them whenever possible. The country lanes are still the best cycling roads in England. Quality is mixed, from fantastic to potholed on main roads where normally, the country lanes have much less traffic, thereby not getting the wear and tear. Overall, traffic in England, like everywhere, is horrendously busy. Vehicles are much more up to date than in NZ and also, much cheaper, that applies to food as well. Courtesy when driving is common place and although there are still idiots on the road, that goes for any country.

England prides itself on its history and so it should as it’s everywhere and they do a great job of preserving it. If England were to follow suit with NZ’s ridiculous earthquake ruling for buildings, there would be nothing left standing here. As it is, everywhere you go is eye opening or jaw droppingly beautiful and the country should be very proud.
Like everywhere nowadays, there are people begging on the streets and living homeless. This is not a good look and something definitely needs to be done. To walk through a city or town and see mattresses and tents erected there is extreme, although Julia and I did wonder what would happen if we suddenly decided to pitch a tent in the main street, what the authorities would do.
The people are incredible. Maybe I feel that way because it’s the country of my birth, but we both feel at home here. As in all countries, there will always be an element that are distasteful and cause problems, but the people we’ve met have been warm and inviting.

This morning Julia jumped in the bath for a soak of tired legs, then followed breakfast with David and generally catching up as we hadn’t seen him since about 2000.   We left about 11am as he was off to visit Elizabeth – he recommended we didn’t go see her, so we didn’t.
The only roads out of Marsh Green, where he lives, are all up and we climbed for the first 2km’s. Even after that, it was a morning of up and down, but we coped very well with it. For the majority of the time we were able to stick to minor country lanes all the way to the town of Lewes.

We had plenty of time so took the opportunity to look around this historic town and take a few photos.  We were immediately struck by how many people we saw limping – it was really weird.
He who laughs last, laughs loudest they say…..well I don’t know how Pete managed to do it but he promised me a surprise today.  All day I wondered what it might be.  A Bounty bar at the next garage perhaps, with maybe even an ice cold coke to wash it down.  We stopped for a Costa coffee, but this was hardly a surprise.  I waited patiently all day for his plan to reveal itself to me, but he outdid himself this time.

As we were cycling alongside the A22 leaving Lewes on the bumpy cycle path, inhaling copious amounts of carbon monoxide from the deafening traffic racing along the road beside us, we came across a roundabout with the turnoff to the A26 to Newhaven.  There was a police van there with lights flashing and sign saying “Incident. Road closed.”
“Come on” says Pete, “Follow me”.
We slid past the police van behind some bushes on the footpath and headed off down the deserted A26 – beautiful road surface, easy gradient and NO OTHER TRAFFIC! Just us!  We cackled madly as we left all the motorists in a choking line of their own exhaust fumes while we sailed merrily down the deserted tarmac to Newhaven.
I was full of admiration for my husband.  I don’t know what he said or what he did to create that diversion and it’s probably best I don’t know and just enjoyed the fact that we had got one over on the motoring public of England.
However, our joy was cut short when after about 6km, we came across numerous flashing lights and police tape across the full extent of the road threatening us with POLICE LINE, DO NOT CROSS.  They’d caught up with us and thought they had us in their sights, but with MapsMe to guide us we backtracked half a km to a small country lane and hightailed it across a train line and over the Ouse River via a walking bridge. 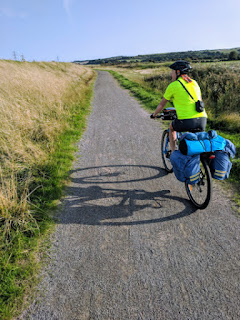 We were rewarded with a compacted gravel path that ran alongside the river and left that drama far behind us.  We’re leaving the country tonight anyway, so as long as they haven’t closed the borders, we should be in France by the morning.

Once we made Newhaven, we bought our ferry tickets and ducked into a pub overlooking the harbour and had a lovely view as the sun went down and we tucked into our fish and chips, blogged and edited photos.  About 8.30pm we cycled back to the ferry terminal building and chatted to a couple of other cycle tourers before boarding the ferry about 10pm.
We were one of the first on and sought out some comfy quiet seats so we could get some kip on this overnight crossing.  There weren’t a lot of people on this sailing and this one particular area had about 100 comfy seats, ideal for settling down and getting some sleep.  A couple of other people came and shared our space, choosing good strategic positions that meant we all had our own area.

Then our pulling power kicked in once again and we had four people come and choose the seats directly in front of us, all drinking coffee, standing up and talking to each other!  As if that wasn’t enough, we then had about 20 high spirited youngsters come and sit in the lounge behind us, talking and laughing very loudly.
Decided to move and found a very quiet lounge with the only people in there obviously intent on getting some sleep – great, our kind of people!  We’d no sooner settled in when a guy in his 60’s walks down to the front of the room and turns on his computer and starts playing a war game at a very high volume.  We didn’t have to say anything as one of the sleepers very quickly got up and told him to turn it off, which he thankfully did.

As we settled down to sleep, the very same irate sleeper then began to snore, making more noise than the war game player.  Tried our best to sleep but in the end we moved and found ourselves a quiet space on the carpeted floor with a bunch of other people and I slept quite well, but Pete struggled.