Up at 5.30am and for Ju that was the longest sleep (of ten hours) that she’s had since we arrived. It’s been a real struggle for her this time to try to shake that jet lag and for Ju, sleep is vital. This is someone who can virtually sleep standing up normally. We both wandered downstairs and began writing blogs and sending and receiving messages. This time of the day, when no one else is awake, is nice just to be able to chat freely. At 6.30am Peg rose and dad about 7am.
By 7.35 am Ju, dad and I were off on an hours walk around a block, containing beautiful scenery, history, stunning architecture and design and to cap it off, ripe blackberry bushes, which we raided and then devoured our bounty. Blackberries are out all over at present, which bodes well for cycling in England. The weather, which had looked very dubious early on, had now come good and there was a nice warmth to the sun.
Once back home, it was straight into breakfast and then the rest of the morning was taken up with Julia doing the wages for the guys in New Zealand and me figuring the layout of my panniers. Dad and Peg left for Anfield to drop dad at Liverpool’s first home game of the season. Amazing really as the ticket that Terry had given dad to go, was the season ticket that dad had owned in 1965 and been kept in the family all these years up until the beginning of this year, when Terry got sick. The guy that Terry handed the ticket over to wasn’t able to attend the match. So lucky dad got the prize.

Stu, Vicky and Andy arrived at 11am and we sat around shooting the breeze until early afternoon, when I dived under the shower, before watching the first half of the Liverpool game. Shortly after, with Liverpool a goal up, Little Jane and Mark arrived to take us to a barbeque at a friend’s house who I hadn’t seen for 38 years, John MacNamara. 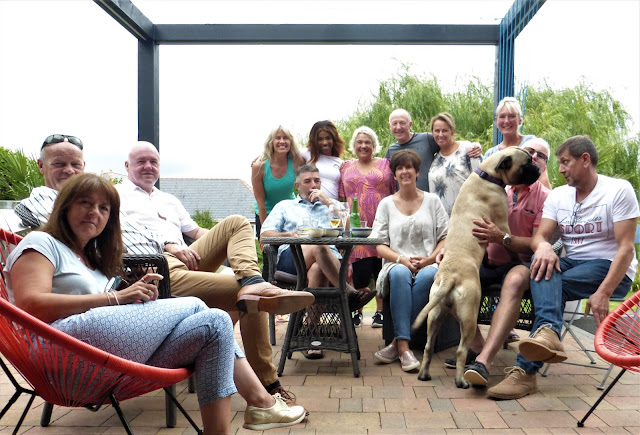 John has done very nicely for himself. He lives in a beautiful home, in Lower Heswall, overlooking the river Dee. He is with Kathy, who is lovely and between them they seem to be enjoying life very much. They entertain a lot and the house is set up for just that. Many years ago when I  was knocking around these parts, John was working at British Aerospace as an apprentice and rebuilding Porsches from shells…very impressive, even then. He is now a property developer doing most of the building work himself.  His specialty is kitchens and bathrooms and he pays special attention to the lighting in these areas.  If the lighting in his properties is half as good as the lighting in his own home, they will be awesome.

At the barbeque we had Gary and Jane, John and Joanne, Mark and Jane and Julia and I. Shortly after Dave Argent arrived then Alexis and Asha showed up. John and Kathy put on a fantastic afternoon with great food, singing and conversation. These are friends that I have thought about often, wondering what had become of them. It’s been nice to see that they are happy and healthy and still the same friends that I knew all those years ago.

Arrived home in time to spend an hour with cousin Ian and wife Rachael and their two gorgeous kids, Oliver and Emily. Unfortunately, that was all the time we had as they had to leave to get the kids ready for school. Hoping to come out to NZ in the near future though.
By now Stu, Vicky and Andy were back at Mariners Park and the rest of us talked for a while before Ju hit the hay, followed by dad and Peg, whilst I stayed up to type up the day’s events and finish the day with Match of the Day, with Liverpool beating West Ham
4 - 0.

Dad had spoken briefly about his visit to Anfield for the game. He certainly didn’t think a lot of the seating arrangements, being absolutely crammed into his seat and having trouble standing up when Liverpool scored. Of course, this is all part of trying to get as many bums on seats as possible as the club attempt to increase the ground capacity. He also mentioned the lack of singing. When we used to attend the games in the 70’s, the creativeness with the singing was fantastic, but over the years we’ve noticed a lack of songs. Whereas once the crowd were singing for the full game, now it’s just sporadic chants of Liivveerrppoooolll,  You’ll never walk alone is still sung before and after, but I’m glad that all our family experienced Anfield and Liverpool in their glory days and you stood in the Kop squashed in, but loving every minute.