Had the best sleep on the tour last night and was very surprised to hear Julia say that it was 8.30am. Even when I do sleep well, which isn’t that often, I never sleep that late. I think it’s because we don’t have curtains in our bedroom, only blinds, which of course let light in through the sides. My sleep from an early age was never very good as I never wanted to miss out on anything and it always seemed such a waste of time. Of course as I have aged, probably prematurely because of a lack of it, I do realise the importance of it. The curtains in this apartment are long and prevent any light from seeping in. I have often made fun of Julia and the fact that she can sleep so well anywhere, when in reality, I envy that ability.

Outside it was miserable. We have already decided to stay another day here, just for fact that we knew this front was going to dump some rain today. It’s supposed to clear up tomorrow so fingers crossed.  We enjoy camping but with the hotels being so cheap down here, it doesn’t make any sense to camp – and it’s a lot of effort to find a campground that’s open.

Ju here – We have faced many trials on this trip, but today was indeed a torturous one for us.  Faced with torrential rain beating on our windows, we were at least safely tucked up against the elements.  Luckily we woke late as we knew we didn’t have much food to see us through the day.  We had breakfast sorted, although only cereal as we had eaten all the bread last night.  A milky coffee and a custard square followed to keep the wolves at bay.  But as the morning wore on, the worry set in.  Between us we had only one custard square.  I could see Pete’s eyes flicking towards it with increasing frequency, so broke the tension by suggesting we have another coffee and split the custard square between us.
Pete accepted this offer eagerly – I think he was worried I would expect him to do the gallant thing and let me have the whole lot.  That demolished, we were now faced with the stark realisation there was nothing left in the larder.  Who would break first?
We turned on the news to distract us from our hunger pangs and couldn’t help draw parallels between our situation and that faced by Asia Bibi, the Pakistani woman who has been on Death Row for ten years for insulting the Prophet Mohammed.  She too was confined to one small room for most of those ten years and starved to within an inch of her life.  Ok I know we have more than one small room, but just remember, there are two of us.  We took comfort that she somehow managed to survive, struggled on, and has now been pardoned.  But still the rain tormented us with it’s relentless rhythm.
We saw our plight had been recognised with the headline “Migrants stranded in Southern Europe” and felt hope that we weren’t in this thing alone.  However, with so many others in the same predicament, would that mean we would have to wait longer for aid to be flown in to us?  We realised if we wanted food, we would have to be the ones to get it, so started to kit up for the trek to the supermarket.  But just as we did that, the sun actually broke through and we safely made it to the supermarket and back without a drop falling on us.  But no sooner had we finished devouring our lunch, than the rain started again – good job we got a lot of supplies! 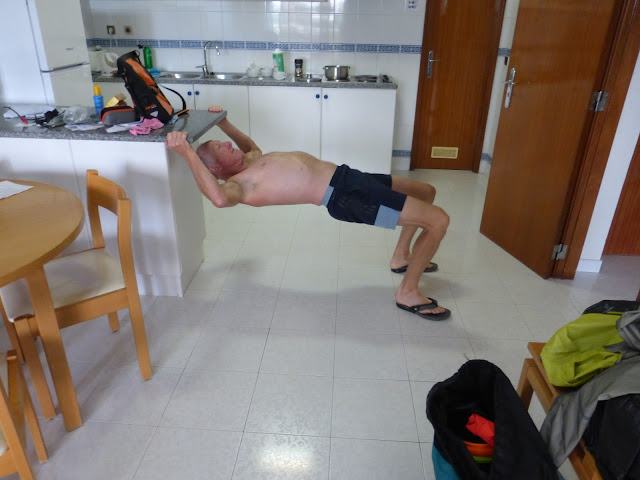 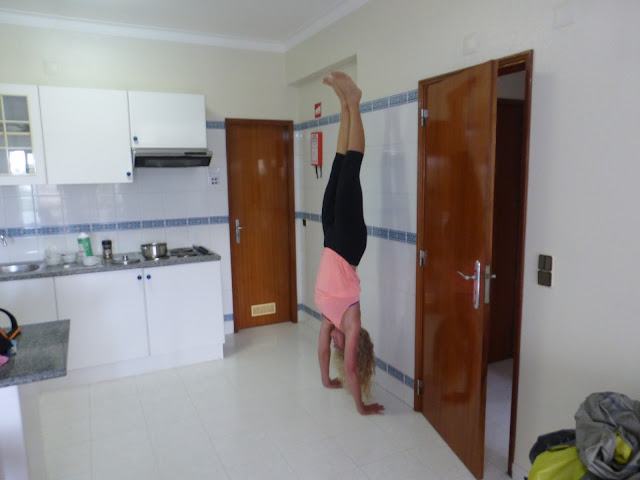 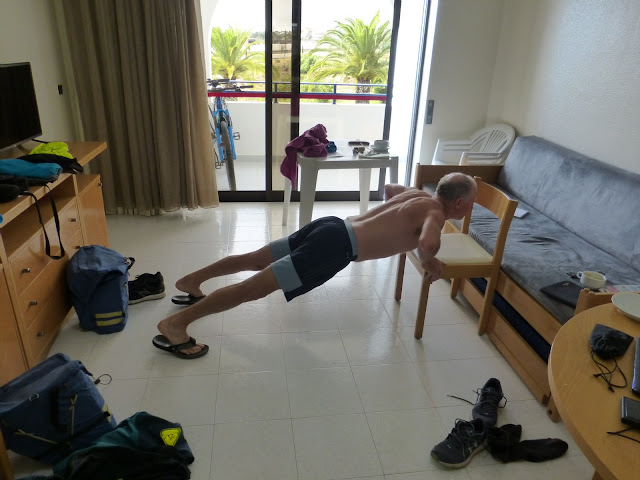 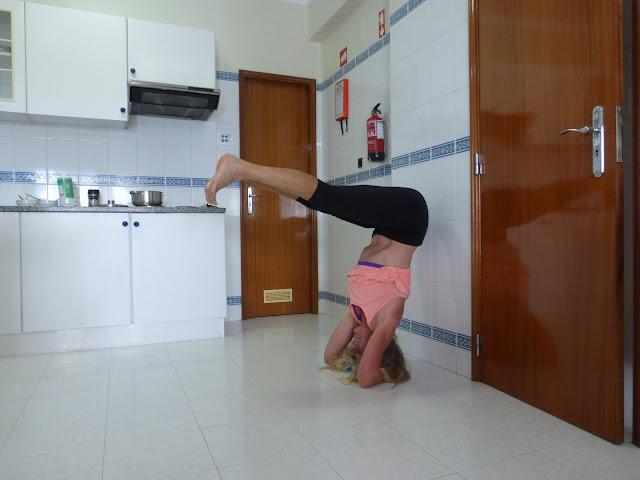 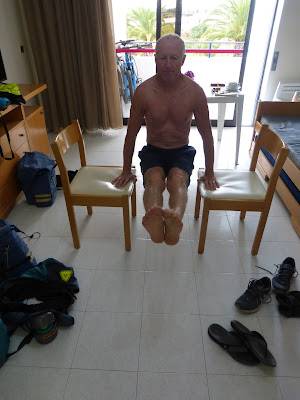 Pete here -  It was well after lunchtime when we finally stuck our heads out of the apartment to venture to the local supermarket, about a km away. Confined within four walls was slightly more comfortable than being confined within the tent, for which we were grateful. And we are grateful, for everything in our lives. I, for one was grateful that the walk was only a km long and that it was an Intermarche, which is a well stocked supermarket, able to provide us with our usual requirements. I was very grateful today that they had Guinness, as I just fancied one.
As we walked in the main doors, we were greeted with a smile and a ‘Hello” by a thirty something well-dressed male. That’s unusual I thought. And unusual, it turned out to be. Upon completion of our little outing, we were met by “Mr Smiley” on the way out. He stood directly in our path and began to ask us to give to his charity.  Now I realise that there are millions of kids starving around the world and people living in poverty everywhere, but I don’t agree with those trying to coerce money out of people who have just been shopping, in an effort to make them feel guilty and that is what they are doing. In these days of charities calling up to request money for this, that and the other, if we give to them all, would that allow us to stand in supermarkets, with a smile, after giving all our money away and look for charity? There will always be others who are less fortunate, however, that is how it has been since the beginning of time. Look at Jesus, he fed the 5000 and look what he got for that. I’m sure if he’d been confronted at a local supermarket nowadays, there would be no way he’d be giving that bottle of Prosecco and that sliced loaf to anyone.
Just so there is no confusion on how guilty this bloke actually made me feel. The mushroom, onion, courgette and cheese omelette went down nicely, as did the coffee with a nice bit o’cake. The day slipped away and before we knew it, darkness had set in, that is now about 6pm. Spent the final hours with a drink, followed by coffee and watching a Clint Eastwood movie on tele, from 2008, not bad either, although because we joined it part way through, we have no idea what it was called. Hit the hay about 10.30pm desperately hoping that we would not be confined to barracks again.