Because it was Thursday, yesterday and I didn’t sleep, because of noise, I made what I thought was a logical conclusion and decided that tonight being Friday and having discovered the place across from where we are is a club, by night, I had more chance of turning religious, than getting any sleep at all. I was correct. If it was loud last night, that was nothing. The other point worth a mention is that, the Spanish may spit constantly and let their dogs crap all over the footpath and street, but as soon as the clubs close, there are the street sweepers, all motorised, all loud and all taking forever.
Didn’t get out of bed until 9am and then it was a shave and a nice hot shower before munching some cereal whilst Julia ate a huge peach. This was a precursor to breakfast which we ate at an outdoor café in the square, (which is actually a rectangle), not far away. Very nice, reasonable price. Today had started out full of cloud. Typical. Just the day we wanted to do a lot of washing. Still, cloud or no cloud, it had to be done, so back to the apartment and put it on. Had a nice interaction with our host Blas, hung up the washing on the outdoor roof terrace before setting off to see Metropol Parasol, a whimsical wooden structure and piece of art, designed by a German architect, Jurgen Mayer.
On the way there we had to sample ice cream from one of the many ice cream outlets, selling a huge selection. Julia had Pistachio whilst I opted for Snickers. Very nice, but Tip Top certainly is our pick. The Parasol is interesting, looming over another square in that part of town. It’s a definite talking point. The rest of the time until 3pm, we casually wandered the streets of Seville taking in the sights, of which there are many. Again there were many buskers, even more churches and quaint streets waiting to be explored.   Then there were all the other tourists.  So many young girls, done up to the nines and practicing their Instagram poses while their friends played photographer, then they swapped roles and repeated the whole performance.  Fine but just don’t do all your prancing and pouting in my shot. 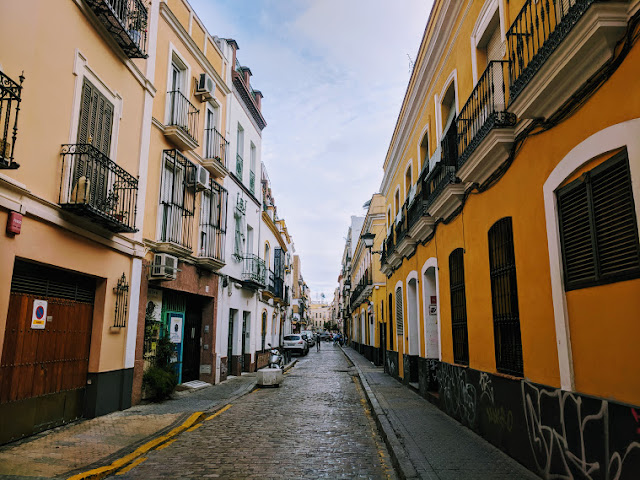 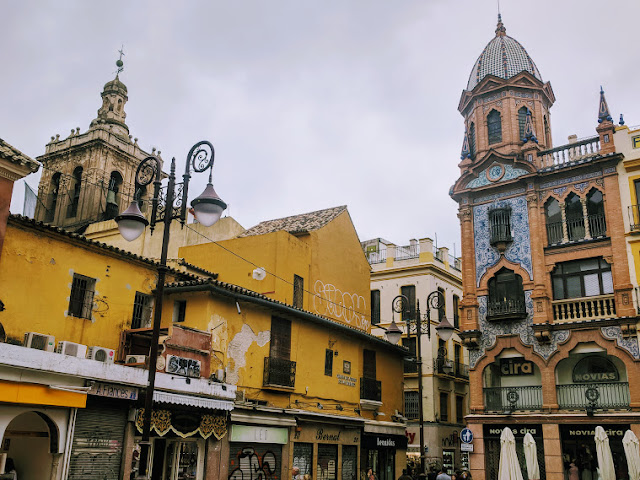 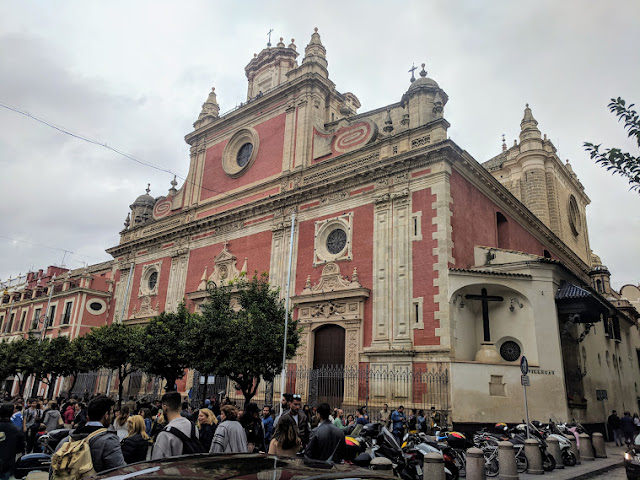 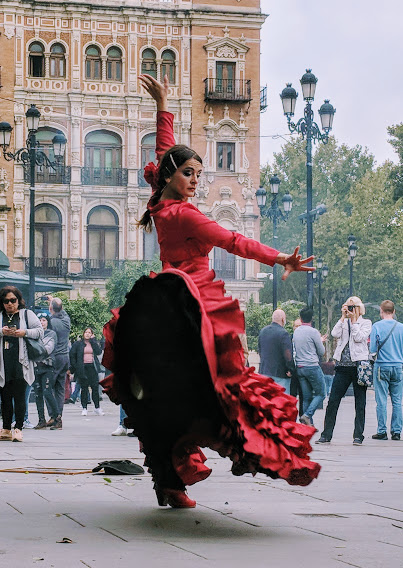 Popped into a café for lunch. Should have known this one was a mistake when after giving the young cocky waiter our order, he comes by about twenty minutes later and asks if we want more.  Actually, we’d just like to eat what we ordered twenty minutes ago mate.  And not your stale bread and dry olives that you so unceremoniously threw on the table.  We waited and waited. Finally the cocky guy says “You not got your food?”  No mate – are we supposed to go get it ourselves because you’re our waiter and you should know whether you’ve given it to us or not. Ten minutes later a surly waitress comes and practically throws one order on the table. Five minutes later we get the second order.  Couldn’t tell whose order was which as they both looked the same.  You’d think it would be easy as Ju had ordered guacamole and chicken, but neither plate had anything green on it.  So we just ate what was put before is as by now it was 3.30pm and we were pretty hungry.  Not hungry enough to touch the dry bread and olives however, but that didn’t stop them charging us for them! Told the older waiter who informed old cocky boy. “Is there a problem?” “No problem. We’re just not paying for something we didn’t order and didn’t eat.” Needless to say, the only tip for this guy is pay more attention to your customers, for they are the ones who pay your wages.
At least by sitting inside we didn’t get bothered by the beggars.  This morning while we were eating our 5 euro breakfasts, we had two beggars approach us asking for money.  We both felt annoyed as it’s not often on this trip we have eaten at a restaurant and we didn’t like being made to feel guilty for treating ourselves.  (If coffee and toast can be called treating yourself). Besides, I’m pretty sure they wouldn’t have been happy if we’d given them a piece of toast, which begs the question, what did they want the money for?
Like all big cities there are a lot of people sleeping rough and setting up their “shops” on blankets, ready to bundle it all up and run from the cops if they have to.  Nobody seems to be buying from these people though so you wonder how they can make a living doing this. 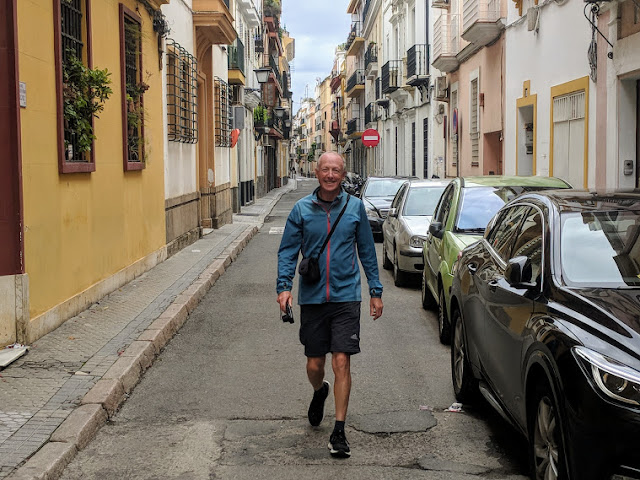 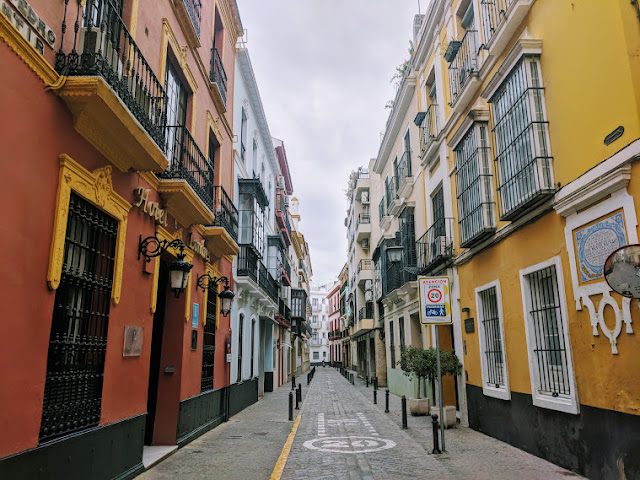 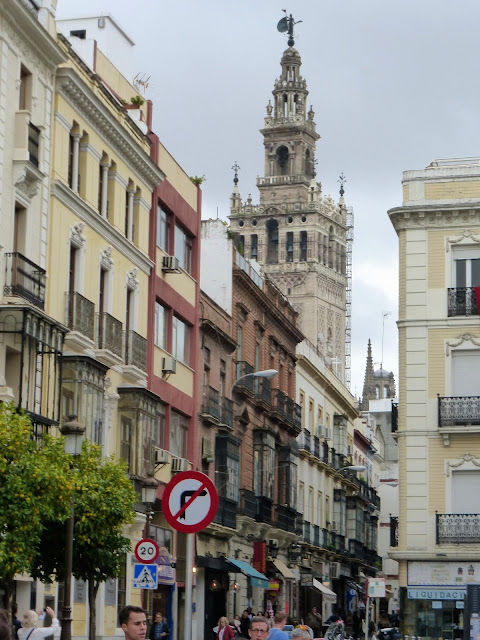 Wandered back to the north end of town to our apartment to get the washing in before it got dark and while Ju loaded the photos on the computer, I had a kip to catch up on the zzzzz’s I’ve missed the last few nights.  When I woke about 8pm, neither of us could be bothered going out so we just chilled in the apartment and ate fruit for tea.