Woke at 8am this morning and went down for our free breakfast, which included fresh, peeled and cut fruit so I was happy and bacon and eggs, so Pete was also well pleased.  After satisfying our appetites, we went back up to our room, grabbed our panniers and checked out.  On the way out of Huelva, we made a quick circuit of all the notable churches before heading down to the waterfront to cruise along the walkway there.   Huelva does not have a lot going for it – it is just a big port town on the face of it, but they have really made an effort with the waterfront.  At the town end is the newly restored Rio Tinto pier which was responsible for shipping the tons of copper and iron mined out of the ground about 50km to the North at the Rio Tinto Mine.  This mine was once the biggest producer of copper in the world but they didn’t care too much about the environment back in those days.  Unearthing the minerals turned the river red and apparently it is still red to this day, hence the name, Rio (meaning river) and Tinto (meaning red).
We knew nothing about this mine but it sounded like it might be a cool place to visit – only problem being it was 50km north of where we wanted to go.  There were also no campgrounds along this route.  So we thought about going slightly south and following the coast a bit longer where there were still campgrounds and in the end, that is what we decided to do.  It must have been the right decision because from that moment, everything flowed.  We had such a lovely ride along the waterfront in the sunshine and the cool wind from yesterday had completely disappeared. 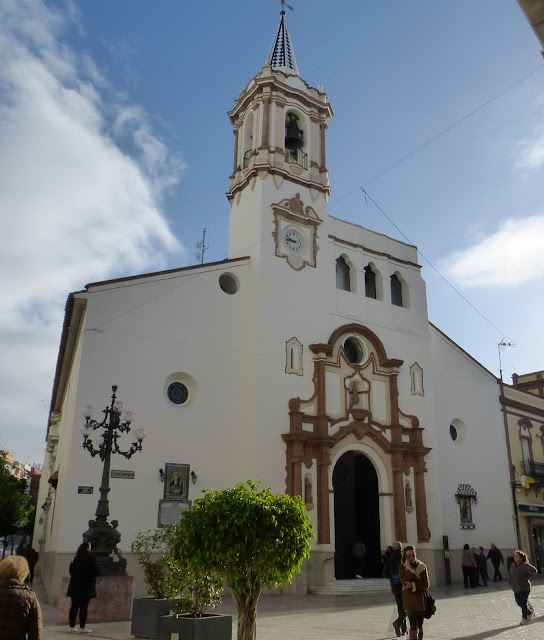 The wide promenade gave way to a cycleway set apart from the road with our own wooden bridges across the marshlands.  This went on for over 5 km and then we crossed on the main road bridge with the rest of the traffic.  Once off the bridge, we had a wide hard shoulder with a good seal and even though there were noisy trucks going past regularly to the neighbouring port area, we never felt endangered or overwhelmed by their presence.

We made good progress and by 11.15am were in Mazagon where we stopped at the supermarket for our lunch supplies.  The beach was quite a way away through the dunes, so we cycled along the deserted beachfront street, marvelling at the emptiness now that summer was over.  We rejoined the main road where we had our own cycle path, the Camino Verde.  This whole area was stunted pine trees and some sort of military zone, judging by the signs on the fences.  It looked as though they had a wildfire through this area over the summer as many of the pine trees were black with no greenery on them whatsoever.

Pine cone gathering seemed to be a very popular activity in these parts as we would regularly pass by men with ridiculously long sticks which they poked up into the pine trees.  We couldn’t understand why they just didn’t gather them off the ground, which we did see a few guys doing.  All the pole wavers were not wearing any sort of protective headgear either, so I dare say they’d had a few donks on the noggin.  Perhaps that’s why they could no longer see the sense in just picking the pine cones up.

We stopped at a handy park bench (where again, we could have had our pick of about twenty), to eat our lunch and then continued on to Matalascanas.  We cycled down to the beach for one last look at the Atlantic before we turned north towards Seville.  Decided we needed to go in for a dip as it would be our last sea swim until we got home, so we jumped in the ocean before drip drying on the rocks.  Then cycled up a very long straight road, again with a wide hard shoulder and not too much traffic.  The scenery was getting a bit boring now as it had been the same all day.  About 4.30pm we turned off to El Rocio, where we had earmarked a campground.  The lovely road disappeared and we were cycling in dirt/sand.  What the hell was that about we wondered until we were distracted by a beautiful building dominating the scenery.

Took some photos and ventured into town and realised the whole town was unsealed, dusty, sandy, dirt roads!!  It was unbelievable in this day and age and we rode round fascinated, even though Pete usually hates getting his bike dirty.  If you ever wanted to film a western, this would be the place to come to.  The streets were wide, all the houses had hitching rails outside them and right on cue, a guy came riding past on his horse.  Then a couple went by in a buggy being pulled by a horse.  What had we come to?  It was like going back in time…..very weird. 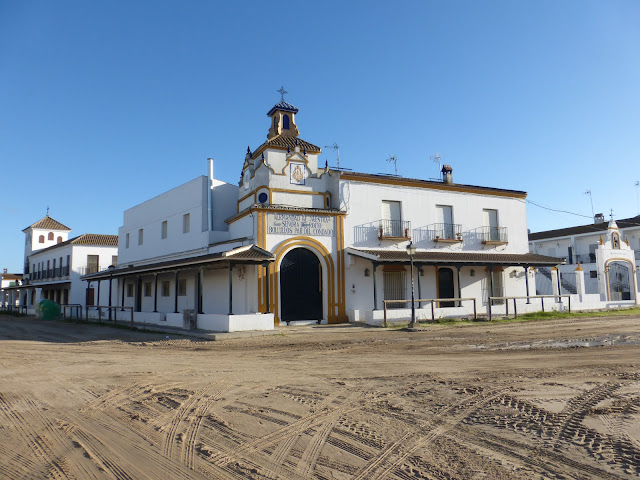 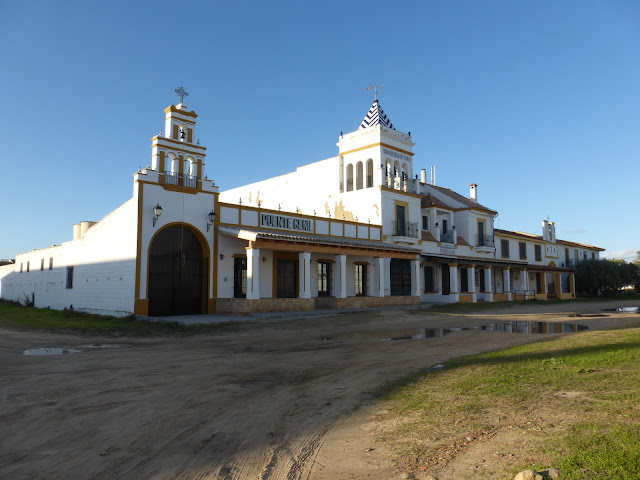 Pulled up to the small supermarket and hitched our steeds to the posts outside and mosied on in to get us some grits……actually it was lentils and chorizo with a can of corn for our veges.  Then we cycled along the dirt street to the campground and set up the tent.  Showered (and the bathrooms had those swinging saloon doors) and then heated our dinner, hoping we had enough gas for the job…..and we did.  Dinner done and dusted, we then ventured over to the near-empty restaurant to get all our blogging done in comfort with a beer and a wine.