Woke to grey skies but a mild day. Moving locations this morning as we couldn’t book our entire stay in Seville here at Casa de Blas. I’m hoping we are not staying next to another nightclub and that double glazing is the norm. As the morning advanced, we checked flights, booked an extra bag from Auckland and posted another blog from two days ago. Also tried to find out dimensions on these boxes we’ve shipped the bikes to Barcelona in. We need to be able to ship the bikes back to NZ in them, otherwise we are in trouble. If we turn up at check in and they tell us the boxes are too big (they are definitely bigger than previous boxes we have used), we have no time to find an alternative arrangement.  Apparently as long as they are not longer than two metres, we should be ok – fingers crossed.

At 11am we left la Casa de Blas and headed south towards the town centre.  We stopped off for coffee and toast on the way where we were sat outside and only had a guitar playing, singing guy asking us for money.  It was definitely a case of I’ll pay you to go away mate, but we let the table next to us do that.  There are so many old and enchanting streets in Seville and always plenty to look at.  So we wandered slowly with all our possessions for the next week in just a pannier bag.  Stopped to watch a bunch of fit young guys perform some very impressive acrobatic and gymnastic dance moves.  However, they didn’t have the showmanship to go with it.  I think it may have been their first time busking and when you see someone who doesn’t know what they’re doing, it’s obvious.  What some people will do in the name of busking is quite unbelievable.  There’s one person who sits outside the post office all day, every day it seems, dressed in a very home-made, extremely colourful but quite tatty bird outfit.  I only know it’s supposed to be a bird, because it has a beak.  They sit there all day playing this inane tune on a yazoo while opening and closing the beak. It has to be one of the most annoying sounds on earth along with the “It’s a small world after all” tune played at Disneyland (well it was 35 years ago, and I still remember it!! Don’t know if they still play it).

Check-in time at our new place wasn’t until 2pm but we chanced going there at 1.30pm and were able to check in straight away.  We thought our last place was central.  This place was wedged between the palace and the cathedral and was brand new, only been open for two months! We had a room which contained two walls of the original city wall and it looked as though sleep could be on the cards as those walls were thick!

Left our gear and once again set out on an afternoon of wandering the city streets trying to capture the flavour that is Seville. 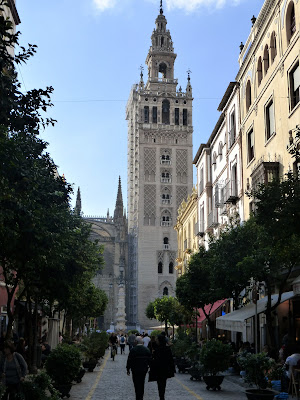 Interestingly, this time of year is particularly busy around and most people who live here go away in the months of July and August, when the temperatures reach as high as forty four degrees. Today we had varying temperature gauges telling us it was twenty seven to thirty five degrees. We estimate it was on the lower end of the scale. Although we’ve certainly been to the tourist attractions, we also tend to go off that path and see the alleys and out the way places. As far as history or architecture goes, there is an abundance wherever you wander.
By late afternoon, with the weather still warm, we realised that we hadn’t eaten anything since late morning, so after a few more kms trying to decide, we settled on a place just around the corner from the hotel called Las Iguana Ranas, where we enjoyed two delicious meals with drinks and great service. Even here, we were approached twice at the table by people asking for money. Have I lost all my compassion, or do others feel the same way. It’s hard to imagine being in that position, but when you see them drinking and smoking, all with better i-phones than I have, I really struggle to feel anything but pissed off. Maybe I’m being tested, if so I fail miserably. 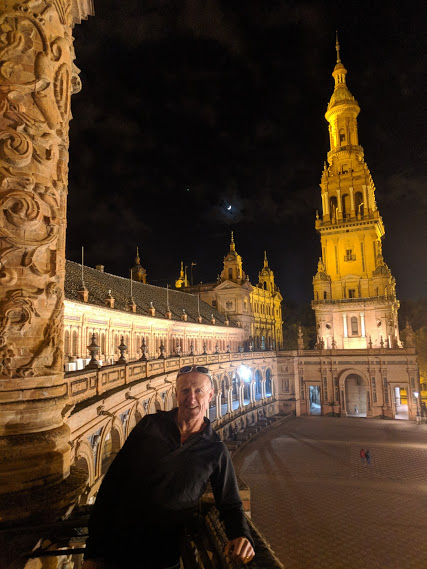 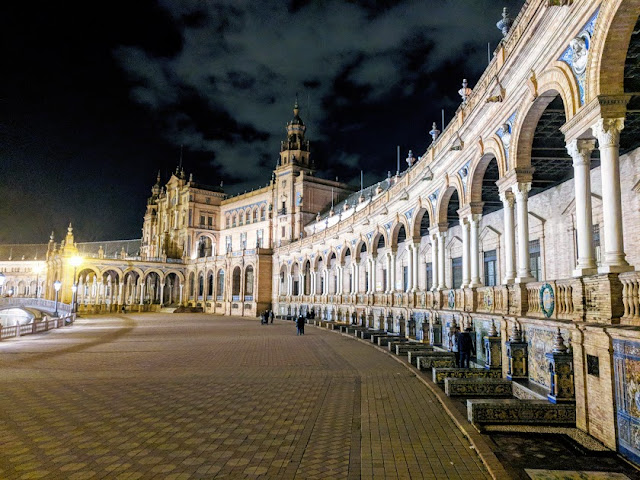 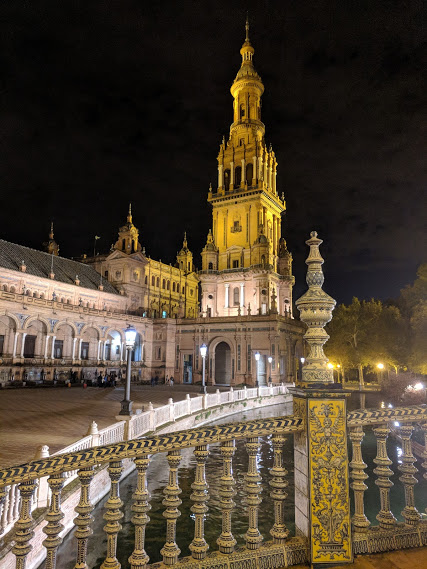 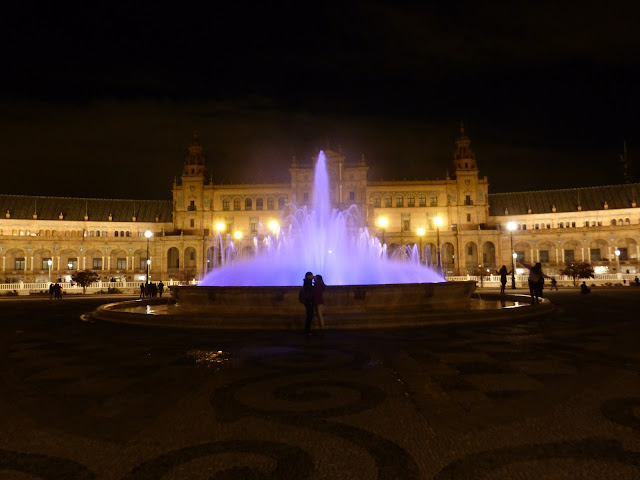 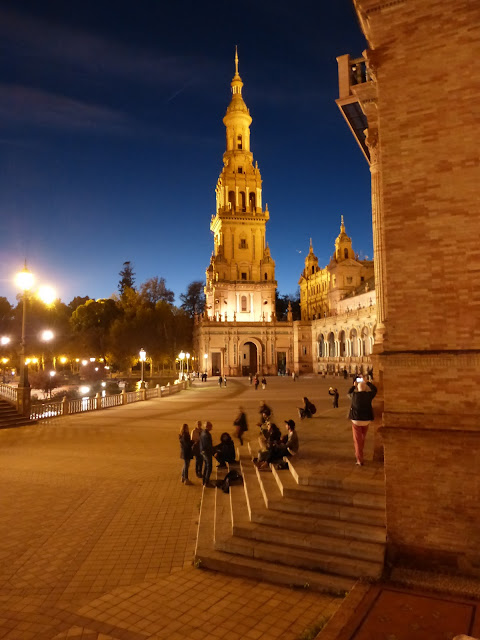 Back to the Plaza de Espana for some night shots, and it’s just as impressive as the daytime. It’s a strange feeling walking everywhere. I keep looking for the bikes. It takes a lot longer to get anywhere that’s for sure. Back to the hotel, just in time to watch some footy on Real Madrid TV. But no…. instead of showing the football, they commentate on the game whilst the cameras stay focused on the Real bench. I would not believe it, if I hadn’t seen it myself. This seems to be par for the course over here when you tune in to watch football – you actually just watch the commentators – I guess Sky have exclusive rights to showing the actual game.  Watched some of a really corny movie dubbed over in Spanish. Don’t know what country it originated from, but you’d have more fun trying to get a government department on the phone. Called it a night about 10.30pm.

Posted by Pete and Julia Dolan at 5:45 AM