Not too bad a sleep, although Ju and I did have a laugh just before going to sleep, as a jet flew overhead and we discovered that we were on the Faro airport flight path. Other than some dogs barking in the night and then spending what seemed a long time, thinking about football in my earlier days and what’s happened to certain players I knew, it was all good.  Although we did have a late night visitor in the form of a black cat in the vestibule, but after fighting off the wildlife I was able to resume sleeping.
Yesterday we had been cycling through some very nice resort areas. Golf courses everywhere, with lots of lush grass. I said to Julia that I hoped they would still have that lush ground cover at the campground. They didn’t. It was back to sand, only to be expected around here.
Morning dawned and we had managed to escape a sodden tent, which is always pleasing. If we don’t, we have to dry it off during the day and that’s just more time that we need to think about, plus we have to have an appropriate area to do it. Not like the old days in Germany in the 80’s, when we found a beautiful park, hung out all our washing, dried out the tent, by hanging it over hedges and then enjoyed lunch….only to discover we were in a crematorium. Ah yes…those were the days. When we could go four or five days without showering. Ju must have thought she’d got together with the wild man of Borneo.

Out of camp and off, heading to Faro. The riding this morning was very uneventful. We varied from main roads with idiots flying along and cutting in too close, to back roads, with no signage whatsoever and idiots flying along and cutting in too close. Had three verbal shouts this morning at car drivers. Once again I’ve taken to riding in the middle of our side of the road, just to try and slow traffic down. If we have a truck coming toward us taking up nearly the whole road, we still have idiots on our side who think that they can still squeeze between us and a forty ton truck. Well, I’m not bothered about you sunshine, but I am about my wife.
The roads chosen by Maps Me are a lottery. Most of the time, brilliant and a real asset, however, sometimes you end up riding on four wheel drive stuff and with panniers, it doesn’t mix. After a few hiccups with certain roads, we finally made it into Faro, just as a jet was landing at the airport, virtually right in the middle of town. Slight exaggeration, but I for one, wouldn’t fancy living there. 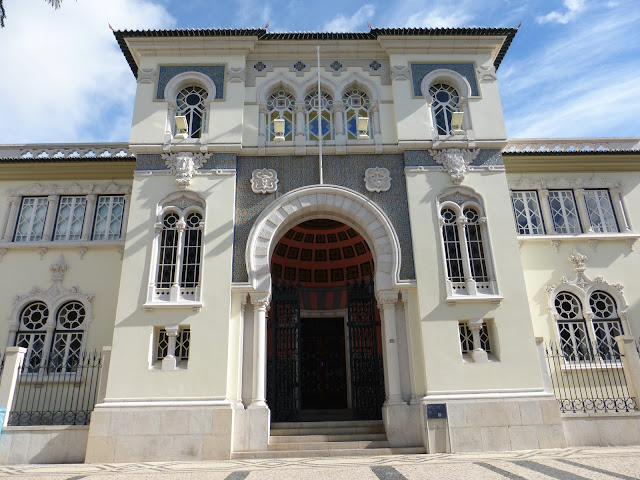 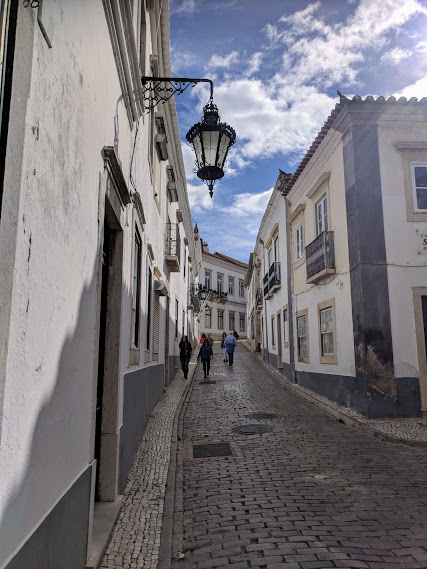 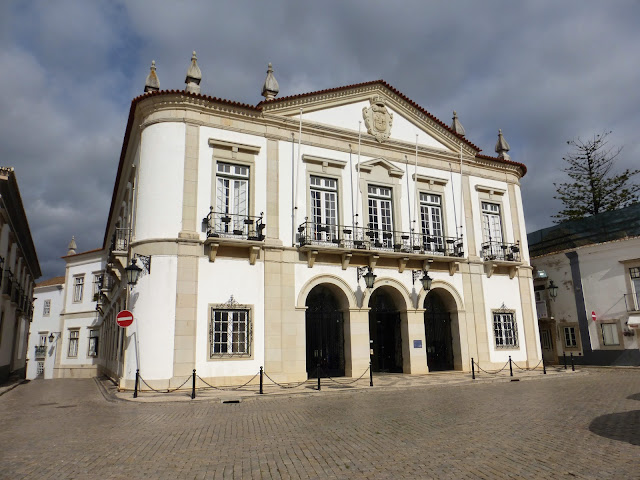 At a Jumbo supermarket, we called in and grabbed some lunch at their café with the usual coffee. The tour of the town didn’t turn up too much of interest, except maybe the storks, purchased on top of one of the buildings we were photographing. Other than that, it was a flying visit and then time to get out of Dodge. Julia had been in touch with her cousin Pippa, who had taken an apartment in Fuseta, further along the coast, so off we headed. 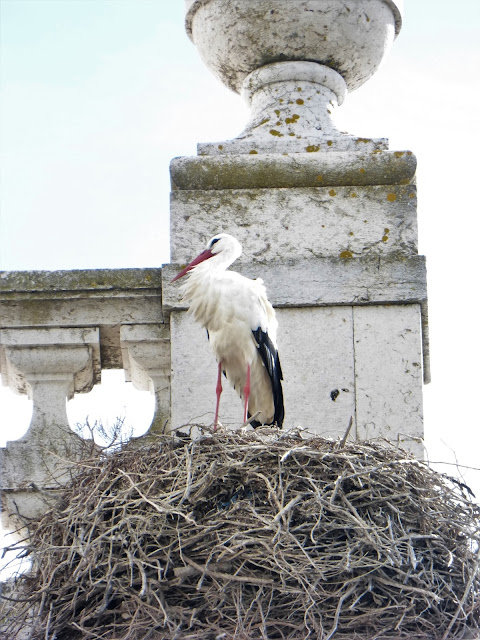 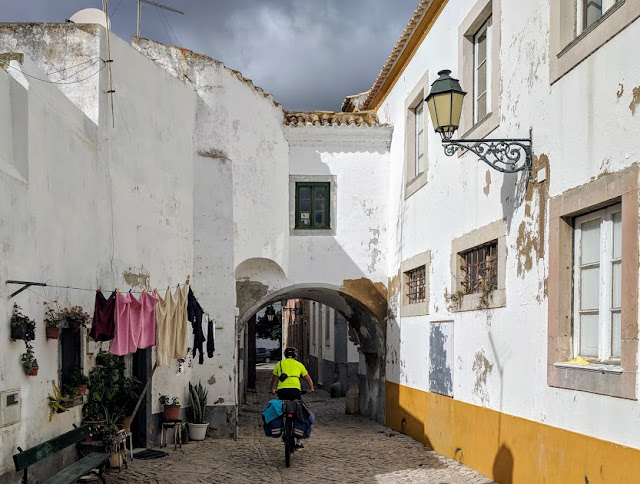 To try and avoid more main roads, we followed the MapsMe recommended route which ended up on a sandy gravel track, which rapidly deteriorated to a muddy mess due to Wednesday’s day of rain, and then ceased. I hate it when that happens. We happened to be next to a railway line, so, rather than turn around, onto the line we went with our bikes and pushed them about 100 metres, over two small bridges, until we could cross to the other side, where another track, looked as though it was headed in the right direction. As we exited the line, a guy was behind us doing the same thing….we’re such trend setters. Had a word and asked if this new track could lead us out and we ended up following him to the end. Julia kept stopping every couple of minutes to take shots of these silty looking ditches. My God, she’ll take shots of anything. Turns out they were salt beds, but I bet they’ll look better than they actually were.

Ju here – pfft!  They will be amazing photos because the light was incredible and if I’d had my way I’d have spent longer there trying to get even better photos.  For me, it was the highlight of the day’s ride.  We had just been riding along saying this day was a bit ho-hum so when I saw MapsMe had directed us onto a track for a short while, I wasn’t too bothered.  It would liven up the day a bit to have a change of surface and venture into the unknown for a bit and we had plenty of time to backtrack if we needed to.  I would have loved to get a photo of Pete cycling along the train track but he didn’t want to wait for me to get my camera out.  In reality we both love taking the road less travelled, although I will concede that sometimes there is a very good reason these roads are less travelled.  Just before we abandoned the mud track, I saw a turtle slip quietly into the creek that our path had now become, so that was an unexpected treat.  And all’s well that ends well – we made it through and got to Fuseta about 4.30pm. 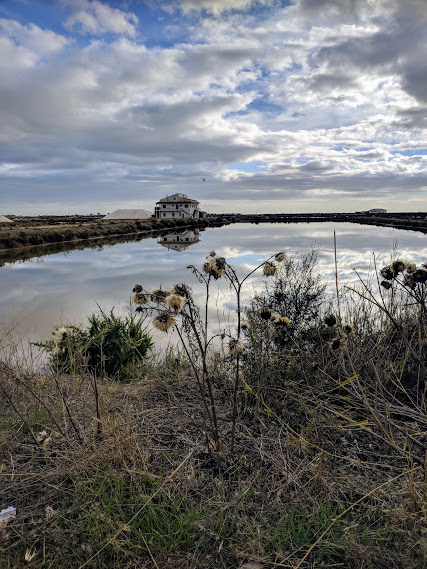 Checked into the municipal campground which was very busy – a lot of longtermers by the looks of it.  Dutch, French and English retirees in their camperhomes, soaking up the sun over the northern winter.  As we were setting up the tent, Pippa and Phillip cycled in on the two bikes that come with the flat they have rented.  We decided we’ll all go out for dinner, somewhere not too flash as none of us have dressy clothes of any description.  So they cycled back to their apartment while Pete and I got showers and blogged.

Walked to the town square where we saw Pippa wave out from their balcony and went up to their lovely spacious apartment.  So many of these towns have these very dodgy looking outsides to their buildings and then you go inside and Wow!  Had a wine and a beer while we chatted and then walked down to the square for dinner.  We all had fish of some description except Pete who had spare ribs and we all thoroughly enjoyed our meals.  Back to Pippa and Phillip’s for a cup of tea and then back to the tent about 10pm.