Had to be out of the hotel at 7am this morning as the taxi was picking us up at that time to take us to the airport for our trip to Barcelona. We’d set the alarm for 6.15am, however, although I had a pretty good kip, especially after the last three nights, neither Julia nor myself could relax fully as we wanted to make sure we didn’t miss the alarm, hence, for Julia in particular, a lack of sleep. During the night she had woken at 2am and asked me to turn the air conditioning off as it was too noisy and the duvet on the bed was making us sweat. She didn’t sleep again after that and by 6am we were up and getting showers.
The taxi, ordered for 7am, arrived at 6.55am and when we walked out to climb aboard, it was chucking it down. The taxi driver certainly knew the route well and timed the lights to perfection on our twenty minute, thirty euro drive. The domestic terminal in Barcelona, is much like most other domestic terminals around the world. They don’t have the glamour of the internationals, they are just there to get people from one city in Spain, to another.  After a coffee and something to eat at the overpriced café, we waited for our plane to board. Going through the x-ray machine and it goes off. I’m asked to take everything out of my pockets…I only had some coins and after removing them, through the machine again, this time without a beep. Not good enough for Spanish authorities however and this time I’m frisked, front and back and then they take a machine which tests whether or not you have come in contact with drugs. I could see my fellow passengers thinking, “I thought he looked a bit suss in the waiting lounge” and others suggesting to their friends that they thought I was probably a coke trafficker. Believe me, the price they charge for a can of coke at the airport, I could probably make a few bucks just going around selling that. At the end of all the fuss, I was back to being just another passenger.
Ju and I boarded the flight in our tank tops and shorts, whilst all the Spaniards were decked out in jerseys and jackets. God knows how they coped on the plane as the temperature was very warm. Good flight and an hour and a half later, we touched down in Barcelona, home of the Sagrada Familia, the Camp Nou, but more importantly, Manuel, from Fawlty Towers.  However, that would have to wait as Dad was arriving from the UK at 4.45pm so we thought we would make use of the time to familiarise ourselves with the airport to ensure a smooth exit on Friday.
We checked with Singapore Airlines about the size of the boxes as we were a little worried they would be too big – No Problem they assured us.  We found out where the scales were in case we need to make sure they are not over the allowed 30kg.  We found out where the taxis would drop us off and we bought another overpriced coffee and sandwich.  Then we cruised over to terminal 2 to meet Dad, who as it turned out had already landed because his plane got in at 3.45pm.  As it was he hadn’t emerged yet and came out into the arrivals hall about five minutes after we got there.

Hugs all round and then outside to catch a taxi.  Got another really good driver who deposited us outside the apartment half an hour later for another 30 euros.  We had to wait for the guy to come and open the apartment for us so sat at a handy bar in the square outside and caught up on the last two months over a beer for me, a shandy for Dad and a wine for Ju.  While we were sitting there, we noticed the Sagrada Familia is right down the end of the square, so that’s handy.

Into the flat which is three bedroomed, nothing too fancy but perfectly fine for us.  Dumped all the luggage then went into a Chinese downstairs where Dad got an omelette (big surprise there!), Ju a paella and I had a pizza.  We all enjoyed our meals and also got massive drinks with them.  Dad had ordered a rum and coke which was at least a double and thought we’d be helping him up the stairs after that as he’s hardly the world’s biggest drinker, but he coped just fine and we all went for a wander to the Sagrada Familia. 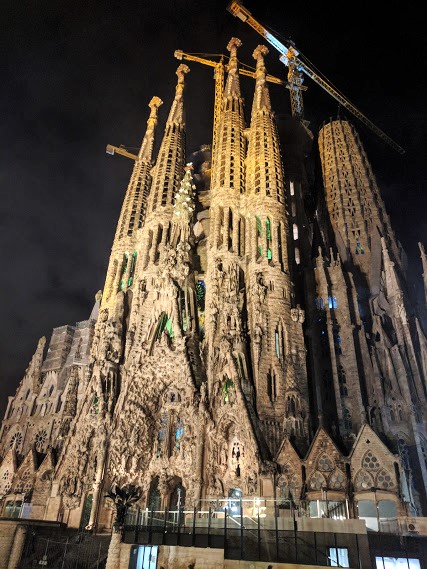 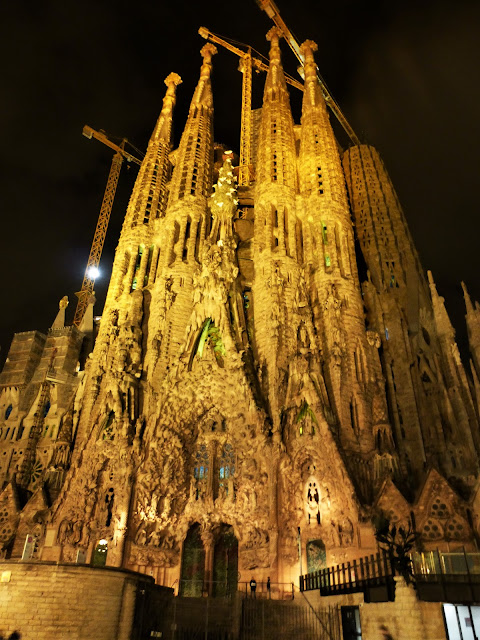 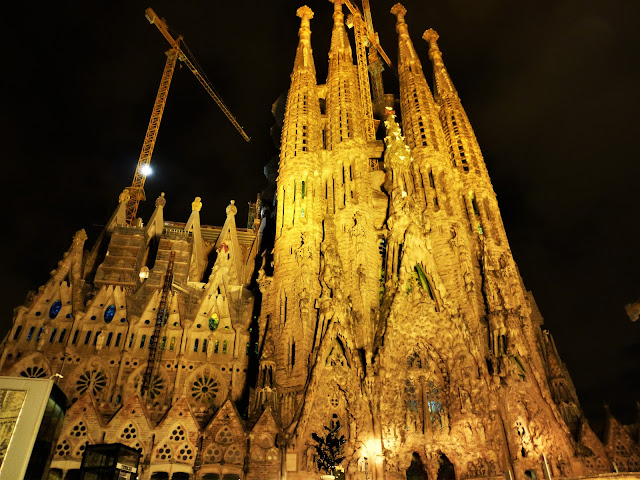 Wow, what a place!  We have seen a lot of cathedrals but this is something else.  Dad suggested that Gaudi, the architect, may have been on drugs, and he’s got a point.  The design is really out there, but of course, that’s what sets it apart.  After taking some photos, we visited the nearby supermarket for supplies then went back to the apartment for a milky coffee and then bed.

Posted by Pete and Julia Dolan at 1:48 PM