I woke during the night to the wind howling outside. Little did I realise until I went outside in the morning, that it had thrown it down as well. Couldn’t guess at the temperature, but at 8am, it was very cold even though the wind had calmed down a bit. We’d stored the bikes on the balcony, so they had been lashed, but that was it. We’ve enjoyed our two day break here and explored a lot of this part of the coast, so today we’re moving on just about twenty kms closer to Faro. The weather outside suggested that we may get a little wet, despite the short distance. Julia spent some time on the computer booking another apartment, this time for 27 euros for the night. The last camp site tried to charge us Euro 23, so why wouldn’t we, especially when it’s cold and wet. She also set about organising the transfer of our bikes from Seville to Barcelona, with the Post Office, let’s hope that comes off smoothly.

Skyped Brody and Kate mid-morning, making the most of the free wifi. They seem very happy after a chat, we left the comfort of the apartment and ventured out into a cold breeze, the only bonus being no rain. Cycled the short distance to Lagoa, with the clouds threatening to rain on our parade. At an Intermarche there we had a cup of coffee and a bite to eat as it began to drizzle, but came to nothing.
Heading to our destination of Armacao de Pera on some smaller roads and with the sky getting darker and following our every move. About a km from the hotel, it began to rain, just as we were half way up a bloody hill. Managed to take shelter under some thick trees, which was lucky as most of them are fenced off. Only lasted a few minutes before we cycled on to the Be Smart Terrace Algarve Apartments. Imagine saying that after you’ve had a few drinks. Arrived at 1pm, check in was 3pm, but they are very casual with that here. The apartment was massive. A huge kitchen, with dining area, plus a lounge. Also a drying room in there. Big bedroom and nice ensuite. Both lounge and bedroom have balconies, plus there is a pool, but it will have to warm up before we are tempted.
After settling in, we had some lunch and prepared to explore our local surroundings. 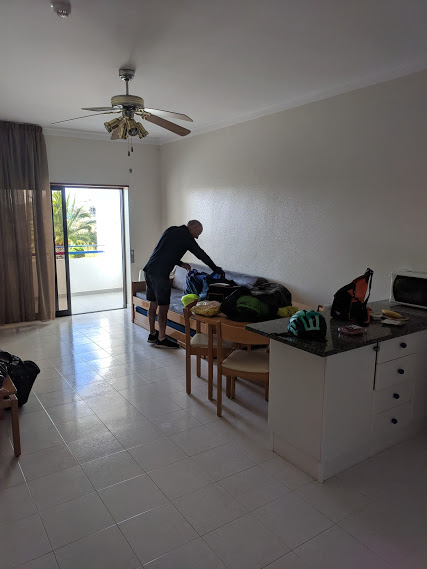 Ju here – yes, I was reminded again about that saying, be careful what you wish for.  As we had been comfortably sipping our coffees in the cosiness of the Intermarche café, we had both said how good it was to be on the bikes again and what a shame the day’s ride was so short.  So while the weather had looked good, we had started a detour down to the beach to go and explore some more cliffs.  However, just as the road deteriorated, we noticed the big black cloud moving in from the west and thought uh-oh.  There was no road east, so we had to head north into the headwind, watching the black cloud approaching and hoping we weren’t going to get a dousing.
After getting away with sheltering in the trees for ten minutes, we were just happy to get to the hotel apartment and out of the cold, never mind any extra cycling.  Can’t believe we were swimming yesterday!  The hotels here are so cheap – not all of them, but there’s plenty on offer on Booking.com and they are really nice places.  We guess they are just trying to cover their maintenance costs during the off-season.  It’s very quiet here and we feel like we might be the only occupants in this whole building! 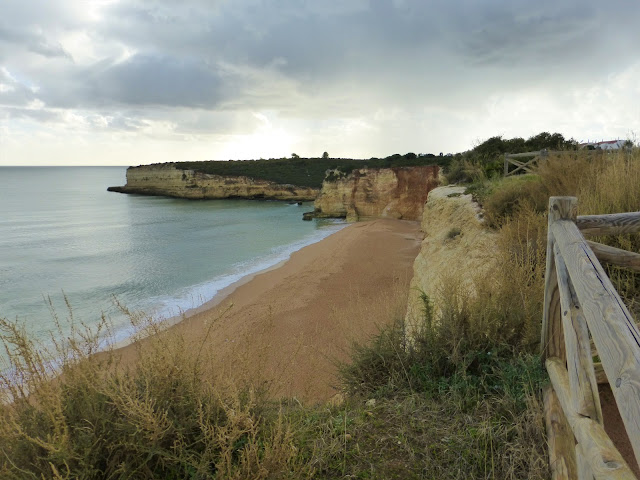 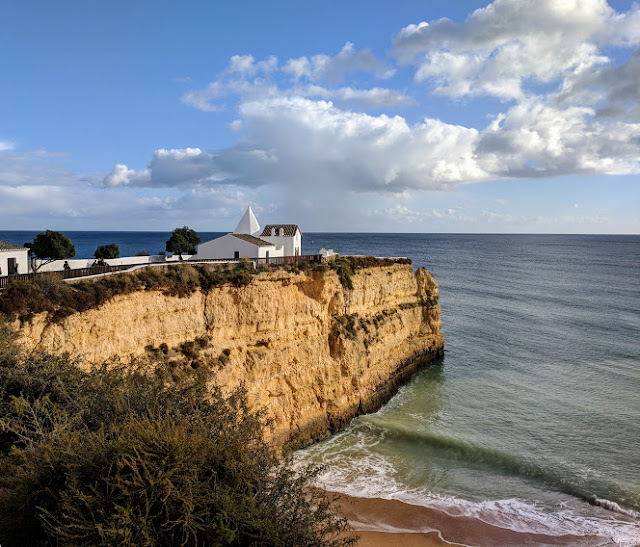 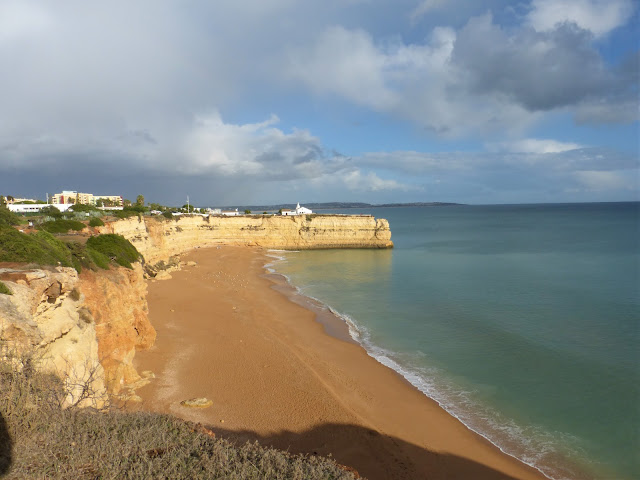 Pete here; It’s now 7.37pm here on the sunny Algarve and we reckon that at no point today did it exceed thirteen degrees. As we sit in the apartment, it is not warm by any stretch of the imagination. We saw a couple of lovely beaches this afternoon, but it was not possible to enjoy them. Could be worse I suppose. Eleven people have died due to bad weather in Italy and of course Venice is underwater…again. The forecast for tomorrow is rubbish, but then it’s looking good for the following week. Spoke to Dad last night in England and he sounds good. Terry is doing well and he’s had a great time with Peg and Andy. He’s got his ticket booked for Barcelona, only eighty five quid and I think he’s also looking forward to catching up with us and heading home, although leaving his brother and sister will be hard. It’s going dark early here now, at 6pm to be precise. Makes for a long night, especially sitting in a tent. At least under a roof, we’ve got a tele and lighting, rather than a couple of head torches.
Ate our dinner then sat and watched a bit of everything on tele, but mainly had music on. Still not decided on our movements tomorrow, very  dependent on the weather.