It was that old whining sound close to your ear that woke me up last night. I told Julia to just go back to sleep, I’d had enough of it. Then the tent was alive with whining, this time the dreaded mosquitos. We both had the head torches on, scanning the interior. A couple of failed swats and then success, but probably too late. Someone had been bitten, big time. Why is it that whenever you swat a mosquito, they’re usually carrying enough blood to carry out a blood transfusion. This occurred twice, but we’ve done pretty well on this trip, so far.
When morning dawned for us, it was 8am and outside it was overcast, not the nice day we were forecast to have.  Like most campgrounds in Spain and Portugal, this one was swarming with cats, but after noticing the holes left in the inner by our last befriended cat, these ones were shooed away before they got too comfortable around us.

After the usual cuppa and breakfast, we did a bit of washing before cycling out of a Portuguese camp, for the last time. Cycled the short distance into Vila Real de Santo Antonio, where we firstly shopped, as the supermarkets in Spain are closed on Sunday, then made our way to the ferry and after half an hour, caught the 11.30am crossing to Ayamonte, a nice Spanish town across the river. Had a look around there and then enjoyed lunch in a small park next to a smaller river. 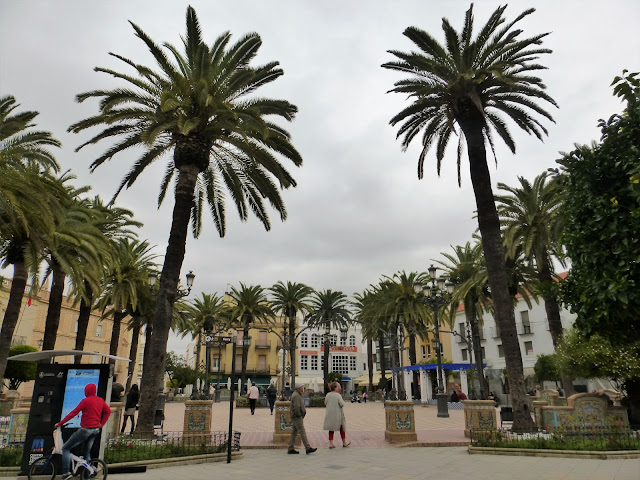 Our ride today was only going to be a few kms, so we were in no rush. On our way out, we picked up the Via Verde cycle route, which took us through the Park Naturel. I, of course was about to get my gear off for some nude cycling, when Julia pointed out that it was not that kind of Natural and I should perhaps remain clothed. Spoil sport…! Cycling through marshlands we spied, storks, herons and then a flock of twelve flamingos. It was great watching them feeding as they do this little dance around on the mud as they have their heads down sucking up all the fishlife that their dance frightens into their mouths. We were close enough and it was quiet enough to hear their feet squelching in the mud.  The track wasn’t too good, which has not been unusual in Spain and Portugal when going off-road, but it was better than most we have encountered, although they must have had some rain here lately as it was full of puddles that we were constantly skirting around. 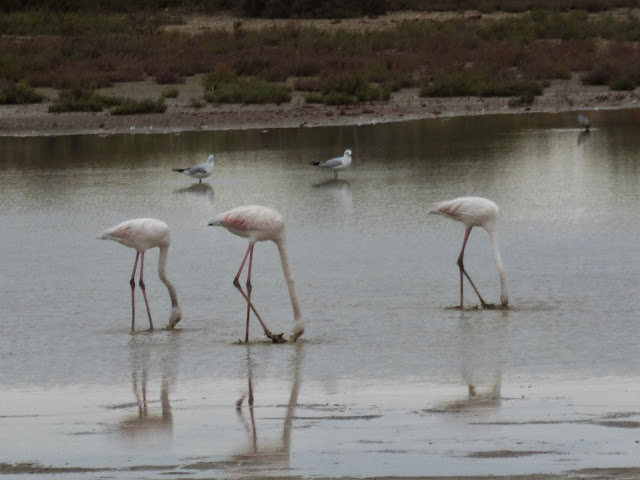 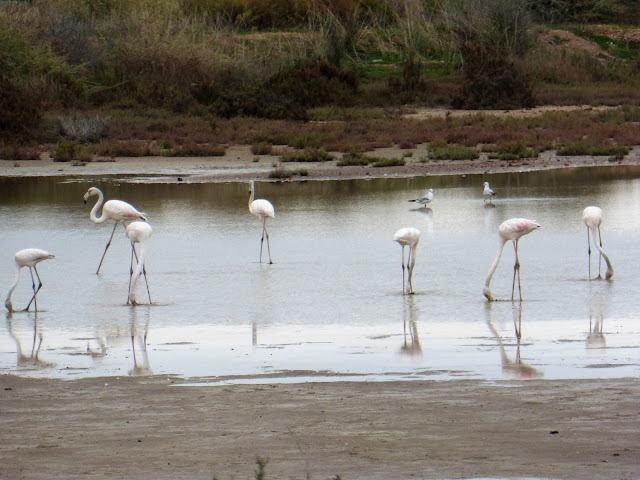 About 3pm, we came off the track and took a quiet main road to Isla Christina, a resort town right on the beach. Neither Julia nor I were feeling like swimming and the sun hadn’t appeared today, so there was no chance of getting any rays. We estimate the temperature would have been sixteen degrees at a push. After a quick ride through part of the town, we took a very good cycle lane along the coast to our campground for the night, named after the town. A very amiable chap signed us in and we had a talk about NZ, before setting up amongst the trees. First thing Julia noticed was mosquitos, whilst I noticed the noisy kids just along the way.
The sun by this time had made a brief appearance, so we strolled across the road for a look at the beach, in case we get a chance to use it tomorrow. Once again the forecast is for cooler weather. This camp, like the last few, is full of campervans on long term stay. Chatting to the reception guy today, he, like others we have spoken to, said that a lot of these people will be here until April or May. Hope the weather fines up for them…!
After our stroll, we bought an ice-cream and sat outside the café charging and blogging until it got too cold to do so.  Returned to the warm refuge of our tent about 5.30pm where I had a beer and Ju a red wine while we loaded the photos on the computer.  Then we cooked our dinner before returning to the café/bar for a coffee.  The bartender talked us into having a special coffee, called a barracito (have no idea if that’s how you spell it) and it was delicious!  We sat at a table with an English guy called Wayne who was into his walking and had an amiable chat with him until 8.30pm.  As we were leaving, the bartender showed us a video of him singing in the carnival competitions which was really cool.  We asked the guy on reception if he could charge our battery pack overnight and he said of course and didn’t charge us.
Back to the tent for a milky coffee and chocolate croissant before another early night.

Posted by Pete and Julia Dolan at 1:42 AM