Slept pretty well and woke to a nice day. Showered and did some washing after having eaten first up. Julia and I walked a couple of blocks to pick up our bike boxes from the Post Office, which we were going to carry back to the apartment, however, they had not arrived. Back at the flat, Julia jumped on the internet to track where they might be. Only information was that they should be here by tomorrow. We still haven’t found how we can transport them to the airport as the boxes they are in are massive and will struggle to get in even the shuttle vans with seats in, unless they all fold down.
That put a spanner in the works with our time running out.

We decided that we were going on a walking tour of part of the city today and our first stop would be the Sagrada Familia, this time in the light of day. With daylight came a deluge of tourists. Still managed to find opportunities for photos and I have to say, it is certainly a work of art and totally different to your average cathedral – and we consider ourselves experts now. 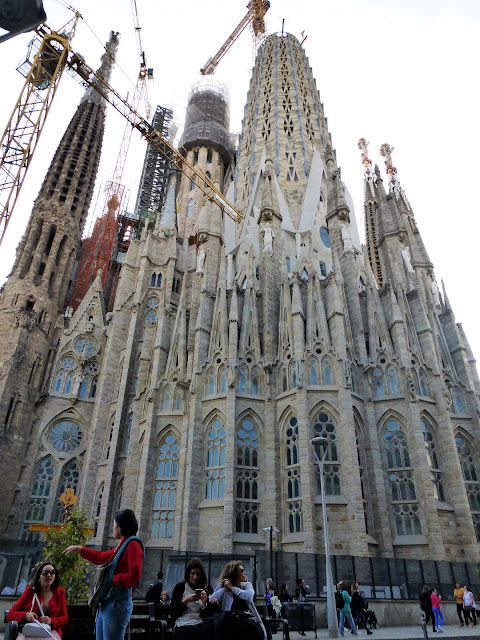 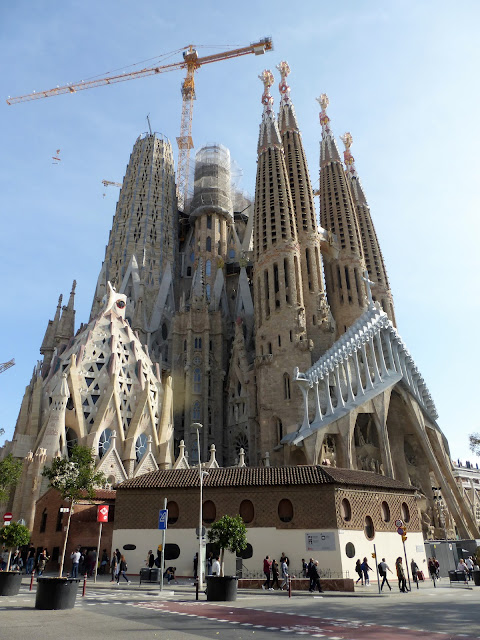 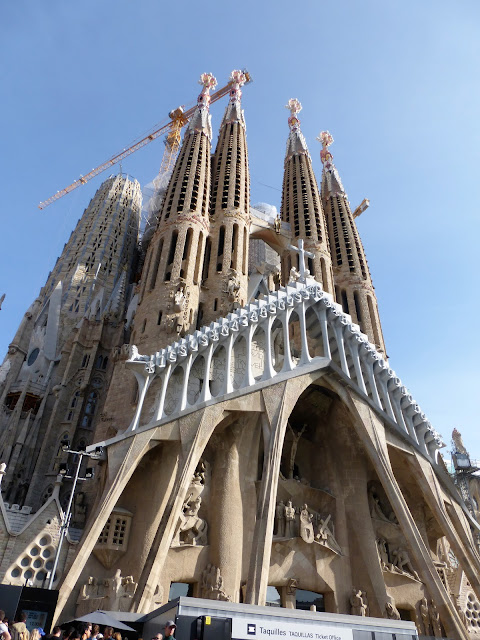 Didn’t realise that Gaudi (the architect) died in 1926 after being hit by a tram.  The locals thought he was a homeless person and so he was taken to a paupers hospital, where he died a couple of days later.  He was 73 years old and had devoted over forty years of his life to the designing and building of the Sagrada Familia.  They think it will finally be completed in 2026 but it’s a bit of a mission, trying to build something of such a huge scale with all those tourists around.  You can just imagine the carnage if one crane operator has an off day.  Even though the cathedral is not finished, it is the most visited tourist attraction in Spain. 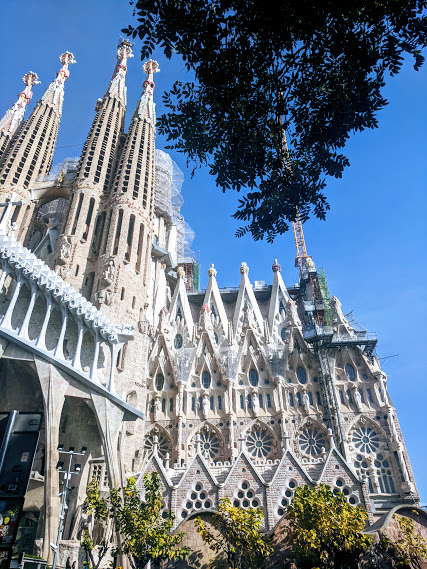 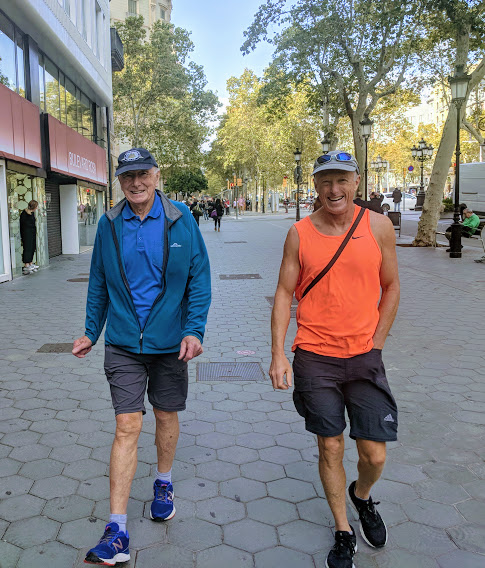 Costa coffee beckoned and even though we knew it would be more expensive than normal, we figured it would be worth it as we hadn’t had a good coffee in a long while.  We ordered and sat down, before being served our café grandes in takeaway plastic cups. Not impressed.  Good coffees need savouring out of a cup. I asked the girl what the story was and was told they only do grandes in takeaway cups. Perhaps you should have a sign telling people that then…!! The coffee, apart from the way it was served, was cold. Not in keeping with their “Every cup a work of art, every sip an experience.”  Very disappointing Costa.  New Zealand coffees would leave you lot for dead. 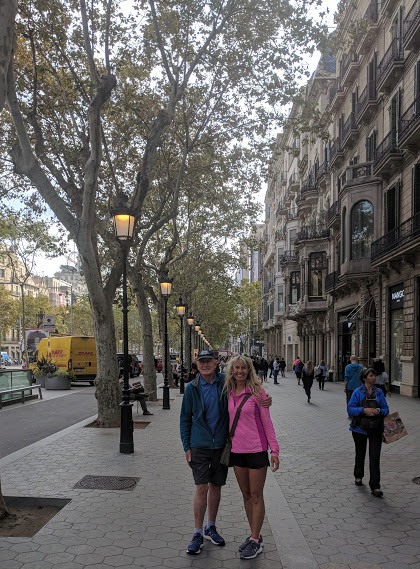 Set off on our walking tour. We were basically doing a Gaudi walk today checking out his works of architecture and we weren’t disappointed. If there was a problem, it was that a lot of his work cannot be captured by camera, because trees that were planted many years ago have grown to block out a lot of possible options for good shots. Still, we persevered and did pretty well. He was a man with creativity for sure. The whole city is geared up to this man and his buildings – it’s quite incredible.  But then his designs are very unusual and easily spotted. 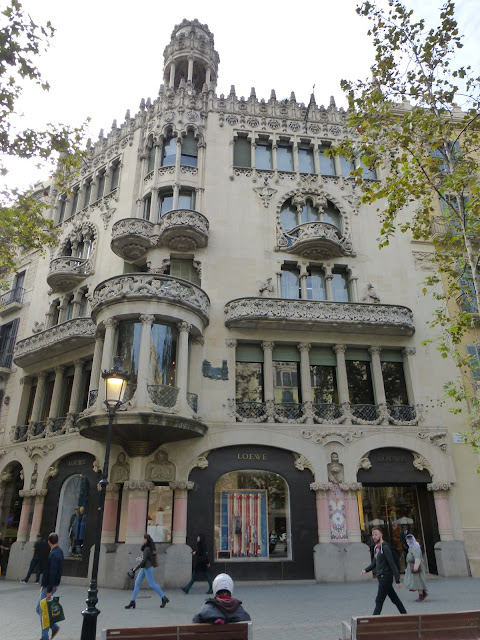 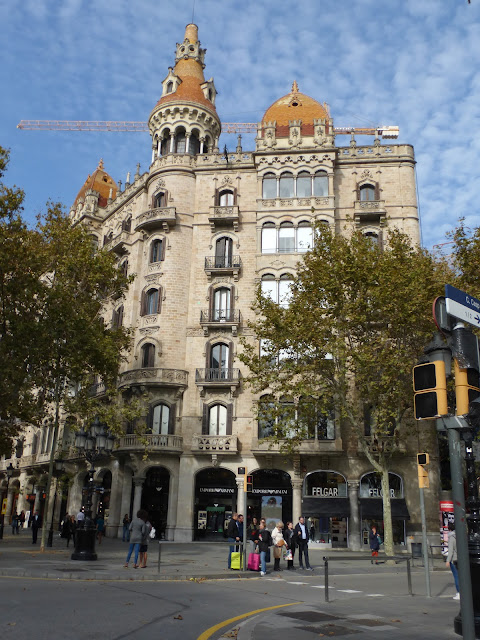 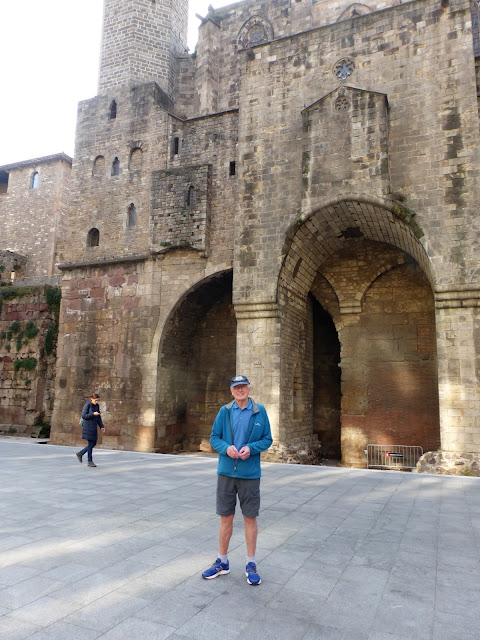 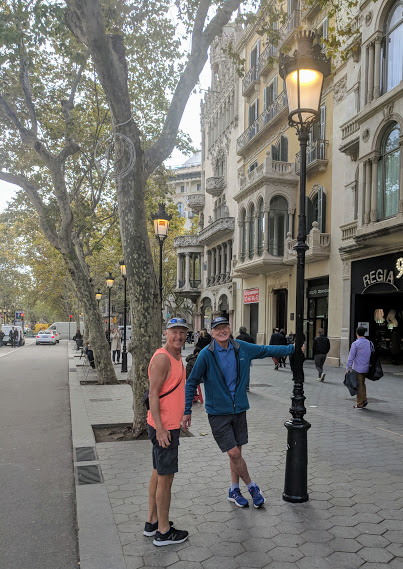 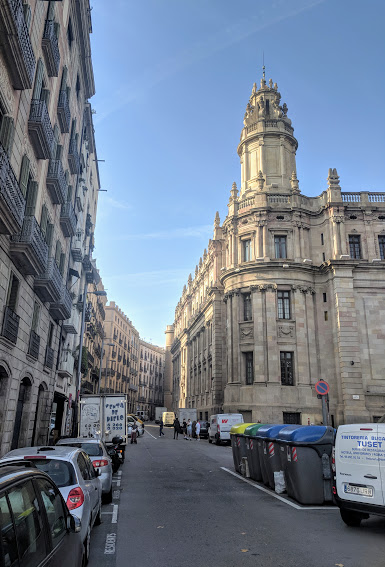 We had walked a long way, past all the designer label stores and down to the marina to begin the Las Ramblas walk, before heading to the Plaza d’Espanya. We were now marching past tenements and apartments. Reached the Barcelona Arena, which looks like a bullfighting ring but is just a shopping centre. Paid to go to the rooftop for a view of the city and the magnificent Museum of National Art of Catalonia, with its cascading waterfall. And then…..my camera battery died. Luckily, Dad had brought his and Julia was snapping away on hers, so we had all bases covered. 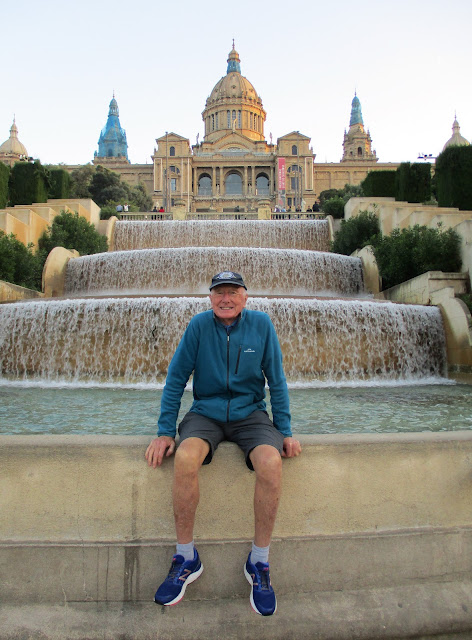 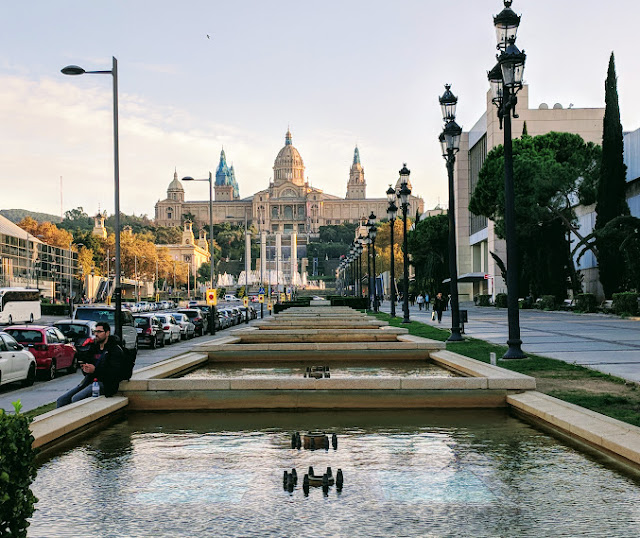 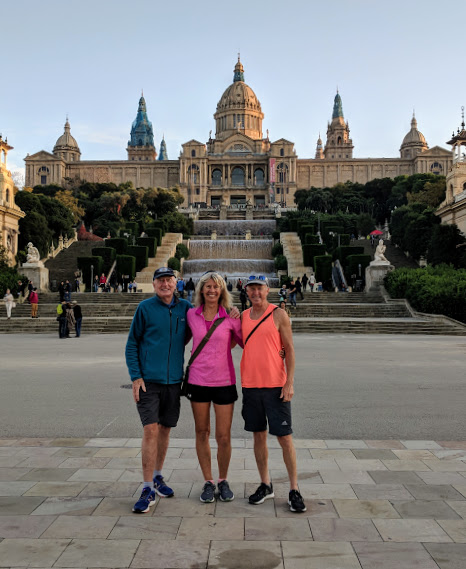 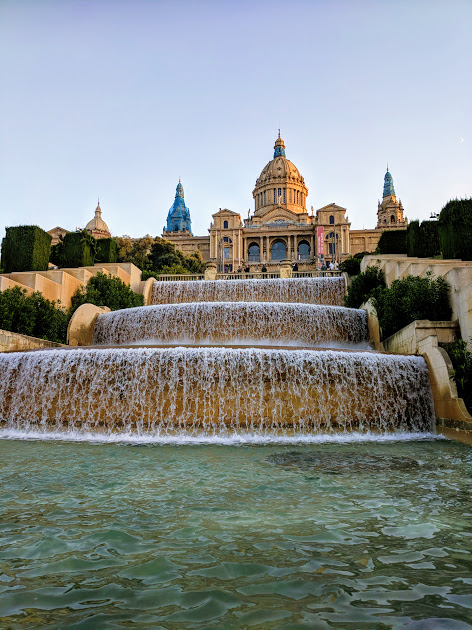 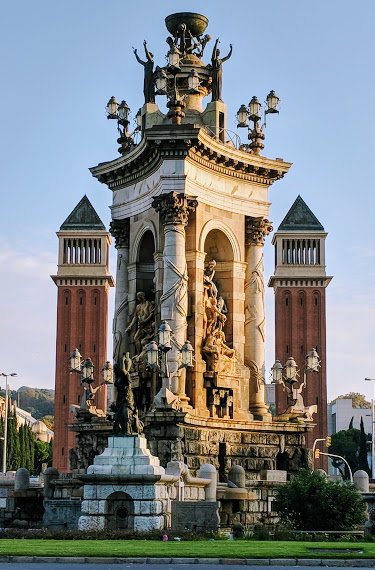 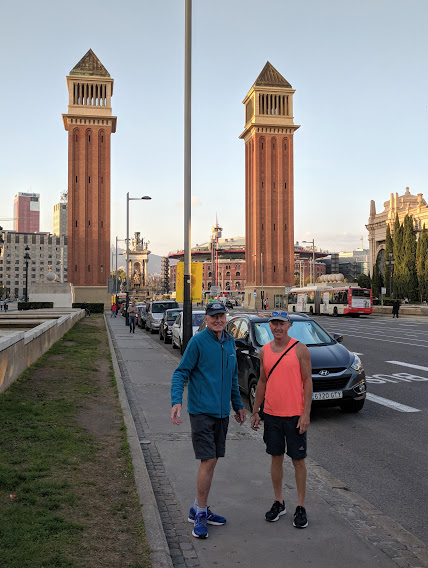 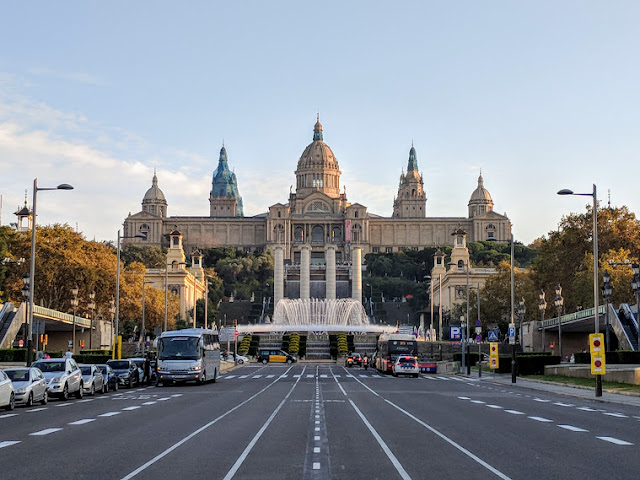 By now, the sun was beginning to set, so a visit to the Metro and a journey back to the Sagrada station, soon had us walking to our apartment after purchasing something to eat from the supermarket.

After eating, we spent the rest of the night contacting possible bike transporters and as of bedtime, still have no idea if we can get those damn boxes in a car/van/truck. The language barrier is a problem as we have discovered with even simple requests, which after relaying the information, we have received something completely different. Only time will tell and time is running out. Received a message just before sliding into bed from a company called Get Bag, who reckon that they can get the boxes into their van plus one passenger. That means that the other two will have to take a taxi. Shouldn’t be a problem, but, once again, it’ll depend on a variety of factors. All it will take is for the taxi not to show and we have a whole can of worms related to checking in.